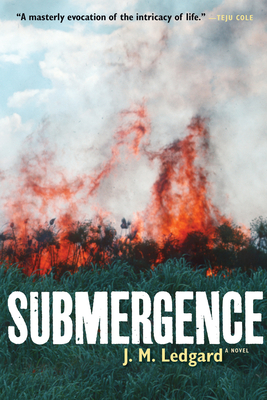 T]he best novel I've read so far this year. . . . I started Submergence one afternoon, cut short a social event that evening to keep reading, stepped off a train at midnight with twenty pages left, and stood under a light on the platform to finish them . . . strange, intelligent, gorgeously written . . . Submergence is a dark book, but in such an unusual sense: Ledgard turns out the lights, and everything, inside and out, begins to glow.--Kathryn Schulz, New York Magazine Every once in a while, a critic will be mesmerized by a book that stands out from--even wipes the floor with--all other books that have come his way of late. . . . Prose merges with poetry; shocks detonate like depth charges, and characters' fates actually matter in Submergence, an astonishing novel that utterly immerses the reader.--Malcolm Forbes, Minneapolis Star Tribune An extraordinary fusion of science and lyricism. . . . A] darkly gleaming novel about love, deserts, oceans, lust and terror.--Alan Cheuse, NPR's All Things Considered Ledgard has given, in Submergence, glimpses of very strange life indeed: the spy in a place so lawless that chaos is the only norm, the scientist in our planet's least knowable region, lovers expert at self-containment. Out of this, acute understandings emerge.--New York Times Book Review In a room with no windows on the coast of Africa, an Englishman, James More, is held captive by jihadist fighters. Posing as a water expert to report on al-Qaeda activity in the area, he now faces extreme privation, mock executions, and forced marches through the arid badlands of Somalia. Thousands of miles away on the Greenland Sea, Danielle Flinders, a biomathematician, half-French, half-Australian, prepares to dive in a submersible to the ocean floor. She is obsessed with the life that multiplies in the darkness of the lowest strata of water.

Both are drawn back to the previous Christmas, and to a French hotel on the Atlantic coast, where a chance encounter on the beach led to an intense and enduring romance. For James, his mind escapes to utopias both imagined and remembered. Danny is drawn back to beginnings: to mythical and scientific origins, and to her own. It is to each other and to the ocean that they most frequently return: magnetic and otherworldly, a comfort and a threat.

J. M. Ledgard was born in the Shetland Islands. He has been a correspondent for The Economist since 1995, specializing in foreign political and war reporting. He currently works in Africa, traveling widely in the continent.

Submergence is a masterly evocation of the intricacy of life, humanand otherwise, but also of pain, pleasure, and the unknown depths. A strange and beguiling novel. The reader is pulled along by the undertow of Ledgard’s intelligence.”
Teju Cole

J. M. Ledgard was born in the Shetland Islands. He has been a correspondent for The Economist since 1995, specialising in foreign political and war reporting. He currently works in Africa, travelling widely in the continent. He is also considered a leading thinker on risk and technology in emerging economies.
Loading...
or support indie stores by buying on