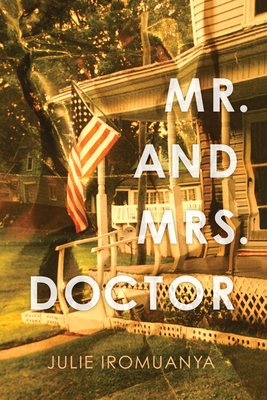 Ifi and Job, a Nigerian couple in an arranged marriage, begin their lives together in Nebraska with a single, outrageous lie: that Job is a doctor, not a college dropout. Unwittingly, Ifi becomes his co-conspirator--that is until his first wife, Cheryl, whom he married for a green card years ago, reenters the picture and upsets Job's tenuous balancing act.

Julie Iromuanya has short stories and novel excerpts appearing or forthcoming in the Kenyon Review, Passages North, the Cream City Review, and the Tampa Review, among other journals. She is a finalist for the PEN/Robert W. Bingham Prize for Debut Fiction. Mr. and Mrs. Doctor is her first novel.

Julie Iromuanya is the author of Mr. and Mrs. Doctor (Coffee House Press), a finalist for the PEN/Faulkner Award, the PEN/Robert W. Bingham Prize for Debut Fiction, the Etisalat Prize for Literature (now 9 Mobile Prize for Literature), and the National Book Critics Circle John Leonard Prize for Debut Fiction. Her scholarly-critical work most recently appears in Meridians: Feminism, Race, Transnationalism and is forthcoming in Callaloo: A Journal of African American Arts and Letters and Afropolitan Literature as World Literature (Bloomsbury Publishing). She was the inaugural Herbert W. Martin Fellow in Creative Writing at the University of Dayton. She has also been a Jane Tinkham Broughton Fellow in Fiction at Bread Loaf Writers Conference, a Tennessee Williams Scholar at the Sewanee Writers Conference, a Bread Loaf Bakeless/Camargo France Fellow, a Brown Foundation Fellow at the Dora Maar House, a Jan Michalski Fellow at "The Treehouses," and the Eternal Vada Fellow at Sangam House. Her work has also been supported by fellowships and residencies at the MacDowell Colony, the Vermont Studio Center, the Ragdale Foundation, Villa Lena, and Villa Ruffieux. Iromuanya earned her B.A. at the University of Central Florida and her M.A. and Ph.D. at the University of Nebraska-Lincoln where she was a Presidential Fellow and award-winning teacher. She is an assistant professor in the creative writing MFA program at the University of Arizona. She is at work on a second novel, A Season of Light.
Loading...
or support indie stores by buying on