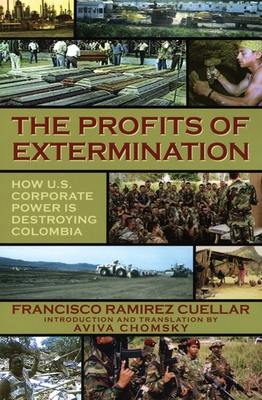 The Profits of Extermination

The Profits of Extermination uncovers the costs of foreign investment, privatization and neo-liberalism in Colombia. US corporations have manipulated the law and worked hand in hand with right-wing death squads and the US government to ensure profits at the cost of the rights and lives of workers, peasants and miners. Colombia is the third-largest recipient of US military aid. According to this study by Chomsky and the Colombian mineworkers union, both US military aid and human rights violations are disproportionately concentrated in Colombia's lucrative mining and energy zones, where large foreign corporations use military and paramilitary forces to secure their investments. Aviva Chomsky is a professor of history at Salem State College. Francisco Ramrez Cuellar is president of the Colombian mining union Sintraminercol.

Francisco Ramirez Cuellar is President of the Colombian mining union Sintraminercol and a member of the Human Rights Team of Colombia's major labor federation, the CUT. Aviva Chomsky is Professor of Latin American history at Salem State College in Massachusetts. She has been active in Central America, Cuba, and Colombia solidarity work for several decades.
Loading...
or
Not Currently Available for Direct Purchase