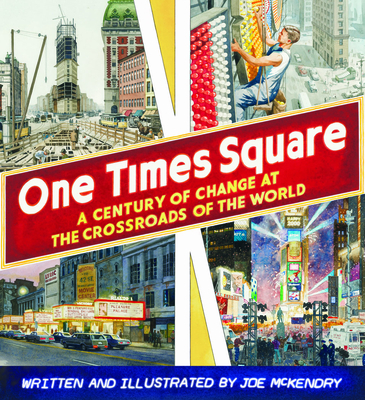 A Century of Change at the Crossroads of the World

More than any other public space in New York City, Times Square is the place where Americans have gathered, in good times and in bad, to catch up on the latest news, to mark historic occasions, or just to meet a few friends. From the Stock Market crash in 1929 to the celebrations marking the end of the Second World War, to annual New Year's Eve festivities with the iconic descending lighted ball, the square and its tower have been an integral part of our history.
One Times Square explores the story of this fascinating intersection, starting when Broadway was a mere dirt path known as Bloomingdale Road, through the district's decades of postwar decay, to its renewal as a glittering tourist-friendly media mecca. Joe McKendry's meticulous watercolors take readers behind the famous Camel billboard to find out how it blew smoke rings over the square for 25 years, to the top of the Times Tower to see how the New Year's ball has made its descent for over 100 years, and onto construction sites as buildings grow up around One Times Square to dwarf what once ranked among the tallest buildings in the world.