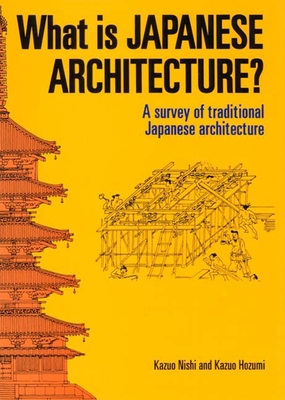 What is Japanese Architecture?

A Survey of Traditional Japanese Architecture

Traditional Japanese architecture—whether Buddhist temples or Shinto shrines, residences, castles, or teahouses—has become increasingly familiar around the world. Through the media of motion pictures, art books, T.V. documentaries and dramas such as Shogun, as well as through personal experience, more and more people have gained an acquaintance and appreciation of the architecture of premodern Japan. Some may even be able to name or recognize the oldest and the largest wooden structures in existence, which are to be found in Japan at Horyuji and Todaiji respectively. Yet often this knowledge is still rudimentary. Confusion abounds as to what distinguishes Japanese architecture from Chinese or Korean, or even Southeast Asian, not to mention what sets off a Buddhist temple from a Shinto shrine or, say, a residence of the tenth century from one of the eighteenth. Until now, there has been no recourse for those seeking, through a single book, to increase their appreciation of the whole range of traditional Japanese architecture. With the publication of What Is Japanese Architecture?, however, this situation has finally been rectified. Construction, design, carpentry, and the background of Japanese architecture, from prehistory to mid-nineteenth century, are here made available within the covers of a single, compact book.

With over 300 drawings that illuminate the essentials of discussion more concretely than words could ever do, and a text that is succinct and always to the point, the book is divided into four parts—one each dealing chronologically with religious structures, residences, castles, and places of entertainment. The reader learns not only how each of these fields of architecture has evolved over the centuries and what distinguishes the buildings of one age from those of another, but something of the historical conditions and the people responsible for these changes as well as the role played by carpentry and methods of construction. The establishment and growth of the historic Japanese capitals—Nara, Kyoto, Edo—is brought sharply into focus, along with the rise and spread of other urban centers. Also highlighted are the mansions of the court nobility; the castles and residences of the samurai aristocracy; the homes of village elders; dwellings of the common people; educational institutions, and places of entertainment such as theaters, red-light districts, teahouses, and country villas.

Any book that is as full of information as this, and readily accessible and clearly illustrated at the same time, will be of great interest and use to a wide range of people—architects, designers, historians, carpenters, movie buffs, tourists, garden designers, and others, whether amateur or professional. Whatever the readers' background, there is little doubt about one thing: they will emerge with an acuter eye and a greater sensitivity to the delights of traditional Japanese architecture.

"A useful, concise compendium of information about Japanese architecture, copiously illustrated with line drawings which augment text descriptions of Japanese structures. Encyclopedic in approach, the book is arranged by chapters that cover broad building types. Within each chapter, particular styles, important works, and notable cities are discussed. Augmenting the text is a listing of sites, a bibliography, and an index. A good book to satisfy the increasing interest in Japanese culture. Recommended for most libraries." —Library Journal

KAZUO NISHI (b. 1938) graduated from Waseda University in 1962 and received his doctorate from the Tokyo Institute of Technology in 1967. He is currently professor of engineering at Kanagawa University. Among his publications in Japanese are A Study of Methods of Architectural Estimation in Early Modern Japan, Carpenters in the Edo Period, and Himeji and Edo Castles.

KAZUO HOZUMI (b. 1930) graduated in architecture from Tohoku University. A freelance illustrator, he has published numerous books in Japanese, including Illustrations of Cars, Horyuji Temple, The Great Buddha of Nara, and The Town of Edo.
Loading...
or
Not Currently Available for Direct Purchase