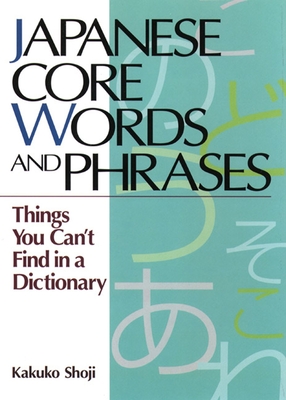 Things You Can't Find in a Dictionary

Some Japanese words and phrases, even though they lie at the core of the language, forever elude the student's grasp. They are not explained satisfactorily in dictionaries or textbooks for the simple reason that they cannot be conveniently defined. Japanese Core Words and Phrases brings these recalcitrants to bay.


The book is divided into two parts, each of which is arranged in alphabetical order. The first part is devoted to words indicating physical as well as psychological distance—roughly equivalent to "this," "that," "that over there," and "where," but quite different in usage. Physical distance is covered in most textbooks, but psychological distance—every student's nemesis—is not.


The second part of the book covers a variety of idiomatic expressions, many of which appear in Japanese proficiency tests. Each entry word or phrase is not simply explained but exemplified in sentence form, clarifying its meaning (in the case of many students) for the very first time.


Japanese Core Words and Phrases has a great deal to offer the beginning student and much to offer the intermediate student. Little more can be asked of a book on the Japanese language.


Previously published in the Power Japanese series as Core Words and Phrases: Things You Can't Find in a Dictionary.

KAKUKO SHOJI, a resident of Honolulu, is a longtime instructor at the University of Hawaii at Manoa. She is the author of Basic Connections: Making Your Japanese Flow and Kodansha's Effective Japanese Usage Dictionary: A Concise Explanation of Frequently Confused Words and Phrases.
Loading...
or support indie stores by buying on
(This book is on backorder)