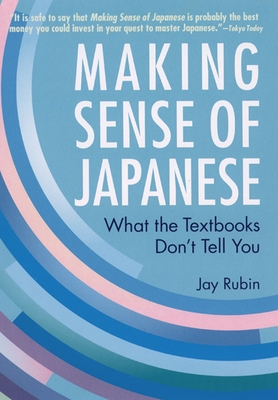 What the Textbooks Don't Tell You

Making Sense of Japanese is the fruit of one foolhardy American's thirty-year struggle to learn and teach the Language of the Infinite. Previously known as Gone Fishin', this book has brought Jay Rubin more feedback than any of his literary translations or scholarly tomes, "even if," he says, "you discount the hate mail from spin-casters and the stray gill-netter."


To convey his conviction that "the Japanese language is not vague," Rubin has dared to explain how some of the most challenging Japanese grammatical forms work in terms of everyday English. Reached recently at a recuperative center in the hills north of Kyoto, Rubin declared, "I'm still pretty sure that Japanese is not vague. Or at least, it's not as vague as it used to be. Probably."


The notorious "subjectless sentence" of Japanese comes under close scrutiny in Part One. A sentence can't be a sentence without a subject, so even in cases where the subject seems to be lost or hiding, the author provides the tools to help you find it. Some attention is paid as well to the rest of the sentence, known technically to grammarians as "the rest of the sentence."


Part Two tackles a number of expressions that have baffled students of Japanese over the decades, and concludes with Rubin's patented technique of analyzing upside-down Japanese sentences right-side up, which, he claims, is "far more restful" than the traditional way, inside-out.


"The scholar," according to the great Japanese novelist Soseki Natsume, is "one who specializes in making the comprehensible incomprehensible." Despite his best scholarly efforts, Rubin seems to have done just the opposite.


Previously published in the Power Japanese series under the same title and originally as Gone Fishin' in the same series.

JAY RUBIN is a professor of Japanese literature at Harvard University, where he has employed the pedagogical techniques contained in Making Sense of Japanese "as infrequently as possible." He has authored Injurious to Public Morals: Writers and the Meiji State and Haruki Murakami and the Music of Words, edited Modern Japanese Writers, and translated Soseki Natsume's Sanshiro and The Miner and Haruki Murakami's The Wind-Up Bird Chronicle, Norwegian Wood, and After the Quake (Knopf and Harvill, 2002).
Loading...
or
Not Currently Available for Direct Purchase