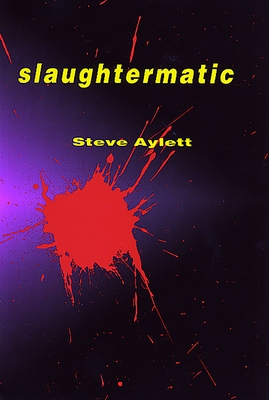 Set in the blood-drenched chaos of Beerlight, "a blown circuit, where to kill a man was less a murder than a mannerism," Dante Cubit and his pill-popping sidekick, the Entropy Kid, waltz into First National Bank with some serious attitude and a couple of snub guns. Murderous, trigger-happy cops, led by the doughnut-chomping redneck police chief, arrive in force, firing indiscriminately into the crowd gathered outside. Surrender or capture is out of the question. Dante's beloved, the murderous assassin Rosa Control--packing a not-so-small arsenal--prowls the streets, trying to engineer her man's escape. Will Dante slip past the forces of corruption and disorder to join his Rosa? What happens next is a tangled mess of reality and virtual reality.

Born in 1967, Englishman Steve Aylett lives outside London. Slaughtermatic is his first book to be published in the United States.
Loading...
or support indie stores by buying on