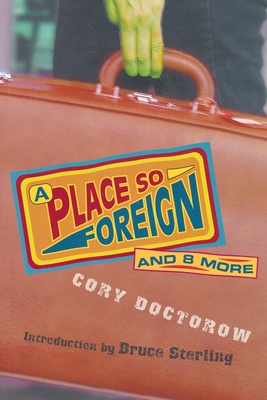 A Place So Foreign and Eight More

Considered one of the most promising science fiction writers, Cory Doctorow's name is already mentioned with such SF greats as J.G. Ballard, Michael Moorcock, William Gibson and Bruce Sterling. He was awarded the John W. Campbell Award for Best New Science Fiction Writer at the 2000 Hugo Awards. Cory's singular tales push the boundaries of the genre, exploring pop culture, trash, nerd pride, and the nexus of technology and social change. His work is a roadmap to the possible futures that may arise in our lifetimes. Additional stories include "Craphound", "All Day Sucker", "Shadow of the Mothaship", "The Superman and the Bugout", "Home Again, Home Again", and "Return to the Pleasure Island".

Cory Doctorow (www.craphound.com) is the author of two novels, Down and Out in the Magic Kingdom (Tor, January 2003) and Eastern Standard Tribe, (Tor, November 2003). He won the John W. Campbell Award for best new writer at the 2000 Hugo Awards, and is a frequent contributor to Wired Magazine. He is the co-editor of the weblog Boing Boing (boingboing.net), a popular news and commentary site with 400,000 visitors a month. Born in Toronto in 1971, he now lives in San Francisco, where he works for the civil liberties group the Electronic Frontier Foundation.
Loading...
or
Not Currently Available for Direct Purchase