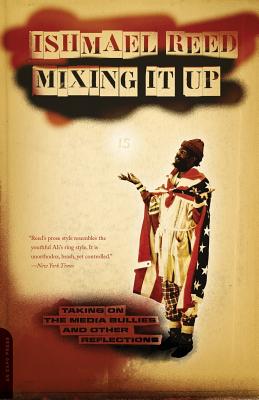 Taking On the Media Bullies and Other Reflections

A new collection of essays first published in The New York Times and Playboy. Reed tackles subjects including Oakland, eugenics, and domestic violence.

Praise For Mixing It Up: Taking On the Media Bullies and Other Reflections…

Rain Taxi, Winter issue
“Ishmael Reed’s writing is a nearly irresistible force. Anyone who wants to read Reed seriously had better come prepared with facts, an open mind, and perhaps even a seatbelt…An adept mix of documentation and outrage shapes most of the pieces…[Reed’s] observations come in many registers, from the strident to the cool…In his ability to pull the comfortable rug out from under his readers and make us aspire to a higher ground of understanding, Reed is one of our most essential and irreplaceable voices.”

Magill Book Reviews
"Perceptive essays about social issues and media missteps, reminding readers why he is a provocative, respected writer, and thinker. It is tempting to compare Ishmael Reed to voices as varied as Mark Twain, Paul Robeson, or Susan Sontag, but that is incomplete and unfair to Reed. He is distinctive and fresh in his own right…This collection is less about race than sense…Spirited and bold throughout, never failing to enlighten…As an anthology, it is a treasure.”

Ishmael Reed is a novelist, poet, playwright, and essayist who has published nine critically acclaimed novels and more than a dozen other books of poetry and essays. In additional to being nominated for a National Book Award for Poetry, recent awards have included the Lila Wallace-Reader's Digest Award, a John D. and Catherine T. MacArthur Foundation Fellowship, and 2008 Blues Songwriter of the Year from the West Coast Blues Hall of Fame. He is Professor Emeritus at University of California at Berkeley.
Loading...
or support indie stores by buying on