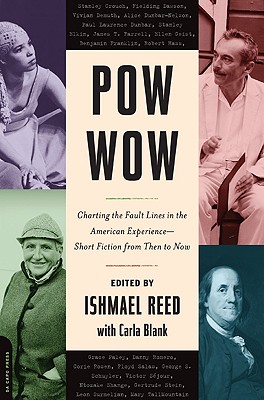 Using the yardstick that a short story is any fiction under 15,000 words, Ishmael Reed with the assistance of Carla Blank has assembled an anthology that includes work ranging from animal stories of the Northwest Coast Eyaks to African-American folklore to reflections on the American Muslim experience. Pow-Wow is the sequel to Reed's From Totems to Hip-Hop: A Multicultural Anthology of Poetry Across the Americas, 1900 2002, a volume that included both Tupac Shakur and T. S. Eliot, and was named one of the best poetry anthologies of 2003 by Library Journal. Its fiction-focused follow-up once again demonstrates the broad range of American writing, from such stellar names as Langston Hughes, Gertrude Stein, Russell Banks, and Alejandro Murguia to newly discovered writers of all races, genders, and backgrounds.

Ishmael Reed is a novelist, poet, playwright, and essayist who has published nine critically acclaimed novels and more than a dozen other books of poetry and essays. In additional to being nominated for a National Book Award for Poetry, recent awards have included the Lila Wallace-Reader's Digest Award, a John D. and Catherine T. MacArthur Foundation Fellowship, and 2008 Blues Songwriter of the Year from the West Coast Blues Hall of Fame. He is Professor Emeritus at University of California at Berkeley.Carla Blank is a writer, editor, teacher, and performance artist. She is author and editor of the historical reference Rediscovering America: The Making of Multicultural America, 1900-2000, and co-author, with Jody Roberts, of the performance arts handbook Live On Stage! Her collaboration with Robert Wilson, entitled Kool, will premiere at the Guggenheim Museum in 2009. She lives in Oakland, California.
Loading...
or
Not Currently Available for Direct Purchase