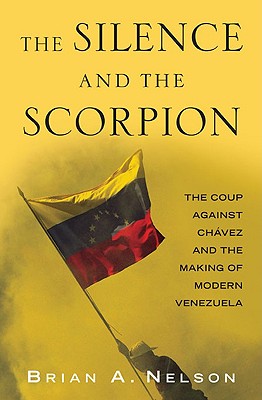 The Silence and the Scorpion

The Coup Against Chavez and the Making of Modern Venezuela

On April 11, 2002, nearly a million Venezuelans marched on the presidential palace to demand the resignation of President Hugo Chavez. Led by Pedro Carmona and Carlos Ortega, the opposition represented a cross-section of society furious with Chavez's economic policies, specifically his mishandling of the Venezuelan oil industry. But as the day progressed the march turned violent, sparking a military revolt that led to the temporary ousting of Chavez. Over the ensuing, turbulent seventy-two hours, Venezuelans would confront the deep divisions within their society and ultimately decide the best course for their country --and its oil--in the new century.

An exemplary piece of narrative journalism, The Silence and the Scorpion provides rich insight into the complexities of modern Venezuela.


Praise For The Silence and the Scorpion: The Coup Against Chavez and the Making of Modern Venezuela…

“…superbly researched…”
“…a compelling narrative…”
“…scrupulously unbiased…”
“It should be read by all those who continue to believe that Mr. Chávez is a worthy champion of democracy and the oppressed.” —The Economist

“…refreshingly impartial and objective…”
“The 2002 coup gives the author a good handle to employ his impressive investigative and storytelling talents, and he succeeds in shedding new light on the complex questions facing Latin America’s most polarize society.”
“…a welcome contribution to the burgeoning literature on Venezuela under the controversial rule of Hugo Chavez.” —America Magazine

“The events of the April 2002 Venezuelan coup to oust President Hugo Chavez are brought to light here in unparalleled investigative reporting by Nelson…”
“His fascinating and harrowing account is part documentary, part eyewitness to history, yet always riveting.”
“At times reading like fiction, his enjoyable text is the definitive account of Chavez's ouster and return, devoid of loyal or opposition rhetoric.”
“Highly recommended.” —Library Journal

“Nelson takes readers from the streets to the halls of the presidential palace, from frightened journalists smuggling tapes of riots back to their stations to be put on the air to a terrified Chávez. …[H]is status as a foreigner familiar with the culture of Caracas and an experienced journalist and academic gives him a unique vantage point from which to tell the very personal stories of those three days of chaos.” —Publishers Weekly

“…a must read for anyone seeking to get an unbiased and comprehensive account of the two most controversial days of the Chávez presidency.”
“Nelson treats the April 11th events with hard-earned restraint, fairness, and an absence of the kind of confrontation and anger that has come to characterize the political debate in Venezuela.” —Huffington Post

“…an enthralling read…shot through with vivid details and strewn with telling and yet all-but-forgotten pieces of the April Puzzle.” —Caracas Chronicles

“Mr. Nelson…dashes Chavez's loud claim that the CIA fomented the popular uprising. The CIA station in Caracas indeed informed Washington of what was brewing - an accepted intelligence function. … The 2002 attempt failed. Will a more effective resistance ultimately upend Chavez's dictatorship? Stay tuned; this saga is far from over.” —Washington Times

""Nelson has given us a case study that brings politics alive. His is an audacious and successful attempt to sort out important political events in their immediacy rather than from a safe distance.... in an effort to draw persons and events vividly, [Nelson] uses narrative devices common to fiction, like interior monologue; and reconstructed dialogue à la Bob Woodward....readers will appreciate his accomplishment." —Current History

Brian A. Nelson's work has appeared in the Virginia Quarterly Review, the Christian Science Monitor, and other publications. He teaches at the Center for American and World Cultures at Miami University in Oxford, Ohio, where he lives.
Loading...
or
Not Currently Available for Direct Purchase