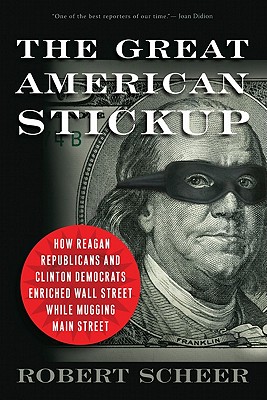 In The Great American Stickup, celebrated journalist Robert Scheer uncovers the hidden story behind one of the greatest financial crimes of our time: the Wall Street financial crash of 2008 and the consequent global recession. Instead of going where other journalists have gone in search of this story -- the board rooms and trading floors of the big Wall Street firms -- Scheer goes back to Washington, D.C., a veritable crime scene, beginning in the 1980s, where the captains of the finance industry, their lobbyists and allies among leading politicians destroyed an American regulatory system that had been functioning effectively since the era of the New Deal.

This is a story largely forgotten or overlooked by the mainstream media, who wasted more than two decades with their boosterish coverage of Wall Street. Scheer argues that the roots of the disaster go back to the free-market propaganda of the Reagan years and, most damagingly, to the bipartisan deregulation of the banking industry undertaken with the full support of "progressive" Bill Clinton.

In fact, if this debacle has a name, Scheer suggests, it is the "Clinton Bubble," that era when the administration let its friends on Wall Street write legislation that razed decades of robust financial regulation. It was Wall Street and Democratic Party darling Robert Rubin along with his clique of economist super-friends -- Alan Greenspan, Lawrence Summers, and a few others -- who inflated a giant real estate bubble by purposely not regulating the derivatives market, resulting in the pain and hardship millions are experiencing now.

The Great American Stickup is both a brilliant telling of the story of the Clinton financial clique and the havoc it wrought -- informed by whistleblowers such as Brooksley Born, who goes on the record for Scheer -- and an unsparing anatomy of the American business and political class. It is also a cautionary tale: those who form the nucleus of the Clinton clique are now advising the Obama administration.

Robert Scheer is the editor-in-chief of the Webby Award-winning online magazine Truthdig, professor at the University of Southern California's Annenberg School for Communication and Journalism, and co-host of Left, Right & Center, a weekly syndicated radio show broadcast from NPR's west coast affiliate, KCRW. In the 1960s, he was editor of the groundbreaking Ramparts magazine and later was national correspondent and columnist for the Los Angeles Times. Scheer is the author of nine books, including The Great American Stickup. He lives in Los Angeles.

REPRESENTATIVE HENRY WAXMAN, Chairman of the House Energy and Commerce Committee
“Robert Scheer has used his skills as one of the best investigative reporters to show that the deregulation philosophy from Reagan to Clinton and both Bushes led to the near collapse of our financial institutions and the Great Recession from which we are still suffering.”

ARIANNA HUFFINGTON, co-founder and editor-in-chief of the Huffington Post
“The Great American Stickup exposes the ugly truth behind the economic meltdown: the fix is in. Seduced by campaign cash and hordes of lobbyists, political leaders of both parties regularly do Wall Street's bidding--leaving Main Street to fend for itself. Even worse, Scheer shows that the people that nearly drove our economy over the cliff still have their hands on the wheel.”

MATT WELCH, editor-in-chief of Reason magazine
“Robert Scheer is among the vanishing breed of journalists who take it as a patriotic duty to criticize power no matter who wields it. Whatever your views on financial regulation, The Great American Stickup makes nauseatingly clear that both major parties—including the current and former president—colluded with banks ‘and left the rest of us holding the bag”

CHRIS HEDGES, Senior fellow of The Nation Institute and author of