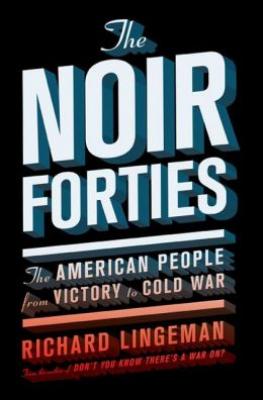 The American People from Victory to Cold War

From one of our finest cultural historians, "The Noir Forties" is a vivid reexamination of America's postwar period, that "age of anxiety" characterized by the dissipation of victory dreams, the onset of the Red Scare, and a nascent resistance to the growing Cold War consensus.

Richard Lingeman examines a brief but momentous and crowded time, the years between VJ Day and the beginning of the Korean War, describing how we got from there to here. It evokes the social and cultural milieu of the late forties, with the vicissitudes of the New Deal Left and Popular Front culture from the end of one hot war and the beginning of the cold one--and, longer term, of a cold war that preoccupied the United States for the next fifty years. It traces the attitudes, sentiments, hopes and fears, prejudices, behavior, and collective dreams and nightmares of the times, as reflected in the media, popular culture, political movements, opinion polls, and sociological and psychological studies of mass beliefs and behavior.


Praise For The Noir Forties: The American People from Victory to Cold War…

Publishers Weekly
“[A] candid reappraisal of America’s postwar era….[T]he book’s greatest triumph is in its depiction of the gradual change in the American populace’s collective journey from the pessimism of the Great Depression, through the hope of a burgeoning postwar middle class, to a climate of fear in the McCarthy era and on into the cold war….[A]n insightful and illuminating blend of history and cultural criticism.”
Stephanie Coontz, author of A Strange Stirring: The Feminine Mystique and American Women at the Dawn of the 1960s
“Lingeman takes us past the platitudes about ‘the Greatest Generation’ to chart the painful transition from the collective ethos of the New Deal and wartime unity to the anxieties of the Cold War and a renewed rightwing offensive against working Americans. Compelling and enlightening.”

Kai Bird, Pulitzer Prize winning biographer and journalist. Co-author with Martin J. Sherwin of American Prometheus: The Triumph and Tragedy of J. Robert Oppenheimer
“This is an astonishing creation, a poignant, beautifully written history and memoir of a forgotten era. Richard Lingeman aptly calls it the Noir Forties, and his stylish prose blends the personal with delightful vignettes of American culture and politics. It is an elite brand of people’s history. Lingeman’s is a voice from the foxhole, soft-spoken and gentlemanly, but no less biting and acerbic than H.L. Mencken’s.” Victor S. Navasky, Publisher Emeritus of The Nation and author of Naming Names“Reading Richard R. Lingeman's masterful account of how America moved from its hottest to its coldest war, is more fun than going to the movies.  Part memoir, part cultural, political and social history, his penetrating look at the post-war years through the lens of the noir films of the forties, is wholly original, a literary coup.” Ellen Schrecker, author of Many are the Crimes: McCarthyism in America“By combining a thoughtful exploration of Hollywood’s dark vision of a violent and immoral society with a penetrating overview of the nation’s shift to the right during the late 1940s, Richard Lingeman helps us understand how the US could abandon its early post-war dream of peace and social justice for the conflict-ridden reality of the Cold War. It’s a chilling narrative that speaks all too forcefully to our present grim situation.”  Maurice Isserman, professor of history at Hamilton College, author of If I Had a Hammer: The Death of the Old Left and the Birth of the New Left“Richard Lingeman’s lively and wide-ranging political and cultural survey captures the curious mix of self-confidence, ambition, anxiety, and moral exhaustion that defined the national psyche in the years between VJ-Day and the onset of the Korean War. Lingeman is a sympathetic chronicler of the generation that fought the Second World War. As we say farewell to the last surviving World War II vets in the decade to come, The Noir Forties will keep alive the world they encountered and made in the five years that followed the war, years when they were young and brave and seeking and healing.” Dan Wakefield, author of New York in the Fifties
“Richard Lingeman ingeniously uses the noir films of the ‘forties to plumb the unconscious of the national psyche and give us a deeper understanding of this pivotal period. Salted by his wry reminiscence of serving as a counter-intelligence agent in Japan, the author weaves his own experience of the era into a fascinating narrative.”

Richard Lingeman, the longtime Senior Editor of the "Nation," is the author of "Sinclair Lewis" and "Theodore Dreiser." He lives in New York City.
Loading...
or
Not Currently Available for Direct Purchase