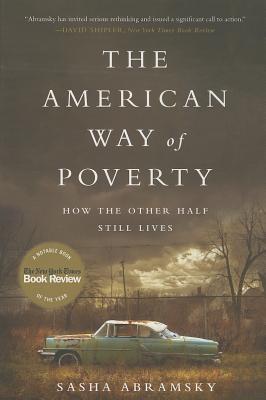 The American Way of Poverty

How the Other Half Still Lives

Fifty years after Michael Harrington published his groundbreaking book The Other America, in which he chronicled the lives of people excluded from the Age of Affluence, poverty in America is back with a vengeance. It is made up of both the long-term chronically poor and new working poor -- the tens of millions of victims of a broken economy and an ever more dysfunctional political system. In many ways, for the majority of Americans, financial insecurity has become the new norm.

The American Way of Poverty shines a light on this travesty. Sasha Abramsky brings the effects of economic inequality out of the shadows and, ultimately, suggests ways for moving toward a fairer and more equitable social contract. Exploring everything from housing policy to wage protections and affordable higher education, Abramsky lays out a panoramic blueprint for a reinvigorated political process that, in turn, will pave the way for a renewed War on Poverty.

It is, Harrington believed, a moral outrage that in a country as wealthy as America, so many people could be so poor. Written in the wake of the 2008 financial collapse, in an era of grotesque economic extremes, The American Way of Poverty brings that same powerful indignation to the topic.

His 2013 book, The American Way of Poverty, was listed as a New York Times Notable Book of the Year, and his 2015 volume, The House of Twenty Thousand Books, was selected by Kirkus as one of the best nonfiction books of the year. Abramsky lives in Sacramento, California, with his wife and their two children.
Loading...
or
Not Currently Available for Direct Purchase