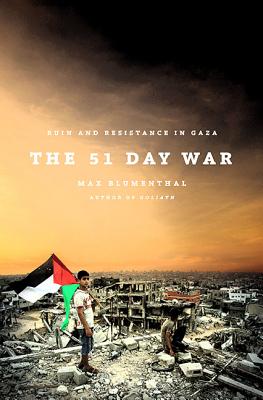 Ruin and Resistance in Gaza

On July 8, 2014, Israel launched air strikes on Hamas-controlled Gaza, followed by a ground invasion. The ensuing fifty-one days of war left more than 2,200 people dead, the vast majority of whom were Palestinian civilians, including over 500 children. During the assault, at least 10,000 homes were destroyed and, according to the United Nations, nearly 300,000 Palestinians were displaced. Max Blumenthal was in Gaza and throughout Israel-Palestine during what he argues was an entirely avoidable catastrophe. In this explosive work of intimate reportage, Blumenthal reveals the harrowing conditions and cynical deceptions that led to the ruinous war--and tells the human stories. Blumenthal brings the battles in Gaza to life, detailing the ferocious clashes that took place when Israel's military invaded the besieged strip. He radically shifts the discussion around a number of highly contentious issues: the use of civilians as human shields by Israeli forces, the arbitrary targeting of Palestinian civilians, and the radicalization of Israeli public officials and top military personnel. Amid the rubble of Gaza's border regions, Blumenthal recorded the testimonies from scores of residents, documenting potential war crimes committed by the Israeli armed forces while carefully examining the military doctrine that led to them. More than a chronicle of war and devastation, The 51 Day War is an urgent warning that the aftermath of the conflict has made another military assault on Gaza almost inevitable. And while the people of Gaza will once again prove their resilience, the world can no longer just stand aside and watch.

Max Blumenthal is the author of Republican Gomorrah, a New York Times and Los Angeles Times bestseller, and Goliath, winner of the Lannan Foundation Cultural Freedom Notable Book Award. His writing and video documentaries have appeared in The New York Times, The Los Angeles Times, The Daily Beast, The Nation, The Guardian, The Independent Film Channel, The Huffington Post, Salon.com, Al Jazeera English and many others. Follow him on Twitter @maxblumenthal.
or
Not Currently Available for Direct Purchase
Copyright © 2020 American Booksellers Association