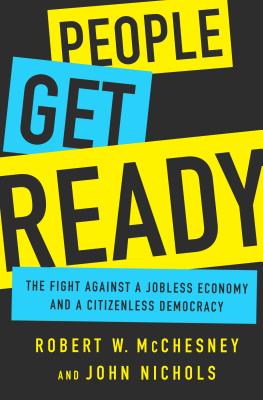 The Fight Against a Jobless Economy and a Citizenless Democracy

The consequences of the technological revolution are about to hit hard: unemployment will spike as new technologies replace labor in the manufacturing, service, and professional sectors of an economy that is already struggling. The end of work as we know it will hit at the worst moment imaginable: as capitalism fosters permanent stagnation, when the labor market is in decrepit shape, with declining wages, expanding poverty, and scorching inequality. Only the dramatic democratization of our economy can address the existential challenges we now face. Yet, the US political process is so dominated by billionaires and corporate special interests, by corruption and monopoly, that it stymies not just democracy but progress.

The great challenge of these times is to ensure that the tremendous benefits of technological progress are employed to serve the whole of humanity, rather than to enrich the wealthy few. Robert W. McChesney and John Nichols argue that the United States needs a new economy in which revolutionary technologies are applied to effectively address environmental and social problems and used to rejuvenate and extend democratic institutions. Based on intense reporting, rich historical analysis, and deep understanding of the technological and social changes that are unfolding, they propose a bold strategy for democratizing our digital destiny -- before it's too late -- and unleashing the real power of the Internet, and of humanity.

Praise For People Get Ready: The Fight Against a Jobless Economy and a Citizenless Democracy…

“As this lucid and informed study explains, digital technology is a reality that will lead to grim dystopia in the hands of concentrated economic and political power, but can also move us toward 'utopian dreams' in the hands of an informed and engaged public. The authors provide guidelines for understanding the evolving world, and for shaping it to deter the worst outcomes and to attain promising goals that are within reach, if the opportunities are grasped.” —Noam Chomsky

“When everyone else seems to be talking about the issues of the past, John Nichols and Robert W. McChesney get us engaged with the issues of the future. This is the essential book about the technological revolution that every candidate for president, every activist, and every American should read. We can no longer afford to be mere consumers and spectators; we need to be citizens and we need to be at the table where the decisions are made.” —Thom Hartmann, host of the Thom Hartmann Project and author of Rebooting the American Dream

“An energetic if grim discussion of inequality and the coming era of underemployment, viewed through the lens of the forgotten American progressive narrative. [McChesney & Nichols] bring clear urgency to this sprawling polemic, which encompasses politics, the cybereconomy, the decline of critical journalism, and historical movements beginning with America's founding…. An authoritative account of the challenges facing progressives wishing to fuse better governance with economic justice.” —Kirkus Reviews

“John Nichols and Robert W. McChesney make a compelling, and terrifying, case [for] a radical reform agenda to take power back from the corporations and give it to the people.” —Naomi Klein

“John Nichols and Robert W. McChesney . . . call us, as Tom Paine did more than two centuries ago, to turn knowledge into power.” —Senator Bernie Sanders

“The authors show ways out of this dictatorial compression chamber. Assuming that is, you become indignant enough.” —Ralph Nader

John Nichols, a pioneering political blogger, has written the Nation's Online Beat since 1999, is their Washington DC correspondent, and is a contributing writer for the Progressive and In These Times. He is also the associate editor of the Capital Times, the daily newspaper in Madison, Wisconsin and a co-founder of Free Press. His articles have appeared in the New York Times, Chicago Tribune, and dozens of other newspapers, and he is frequently appears on MSNBC, NPR, BBC and other broadcast media outlets as a commentator on politics and media issues. Nichols lives in Madison, WI and Washington DC.

Robert W. McChesney is the Gutgsell Endowed Professor in the Department of Communication at the University of Illinois at Urbana-Champaign and the author or editor of twenty-three books. His work has been translated into thirty languages. He is the co-founder of Free Press, a national media reform organization. In 2008, the Utne Reader listed McChesney among their "50 visionaries who are changing the world." He lives in Madison, WI.
Loading...
or support indie stores by buying on