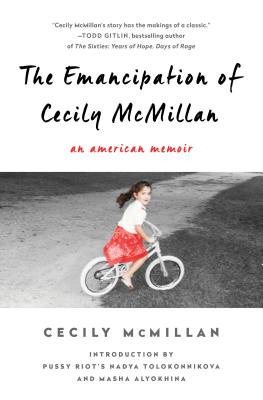 The Emancipation of Cecily McMillan

Cecily McMillan didn't come from much: she had a hardscrabble life bouncing between the members of a broken family scattered from Texas to Atlanta. Her relationship with her parents became increasingly strained, and at sixteen she was legally emancipated and taken in by a beloved teacher. She became politically active at a young age, leading walkouts against the Iraq War in high school and protesting against union busting in college. When she moved to New York for a masters degree at the New School, she found herself planning what would later become Occupy Wall Street.

On St. Patrick's Day, 2012, her life changed forever. Cecily swung by Zuccotti Park to pick up friends on her way to meet others at a nearby Irish pub -- but she never made it out. The celebration was cut short by a police raid that cleared the square. In the melee, she was grabbed from behind by a police officer. Two years later she faced a Kafkaesque trial and was sentenced to three months at Rikers Island.

Inside Rikers, Cecily grew close to her fellow inmates, women with precarious lives who took her under their wings and taught her how to navigate life in prison. Through them, she remembered where she came from and who she was fighting for. And through them, she found her voice. The Emancipation of Cecily McMillan is an intimate, brave, bittersweet memoir of a remarkable young woman trying to make sense of her place in the world.

Praise For The Emancipation of Cecily McMillan: An American Memoir…

“Cecily McMillan's self-portrait of the activist as a young woman dignifies the played-out term ‘badass.' Many people braved the wilds of Zuccotti Park; far more have endured Rikers Island—what sets McMillan apart is her fearless insistence on always interrogating her circumstances, and making them better. But what makes this memoir sing is her voice. Wise beyond her years, earnest-yet-funny, and strong enough to share her own vulnerabilities, McMillan has written a book that is both refreshingly humanizing and deeply inspiring.”
—Kate Bolick, author of Spinster

“Cecily McMillan's story has the makings of a classic. Her writing is as exemplary as her commitment: as an observer, she puts all her senses to work; she has the storyteller's craft in abundance. In The Emancipation of Cecily McMillan, a great American story will find its teller.”
—Todd Gitlin, best-selling author of The Sixties: Years of Hope, Days of Rage

Cecily McMillan is an activist, union organizer, and advocate for prison reform whose participation in and arrest during the Occupy Wall Street movement, along with her trial and conviction, have been widely covered by the national media, including Vanity Fair, the New York Times, Cosmopolitan, and Rolling Stone, among others. Her own writing has appeared in the New York Times and Alternet.
Loading...
or
Not Currently Available for Direct Purchase