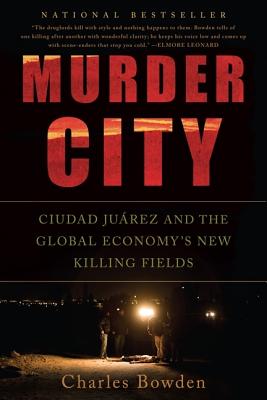 In Murder City, Charles Bowden-one of the few journalists who spent extended periods of time in Juarez-has written an extraordinary account of what happens when a city disintegrates. Interweaving stories of its inhabitants-a beauty queen who was raped, a repentant hitman, a journalist fleeing for his life-with a broader meditation on the town's descent into anarchy, Bowden reveals how Juarez's culture of violence will not only worsen, but inevitably spread north.

Heartbreaking, disturbing, and unforgettable, Murder City was written at the height of his powers and established Bowden as one of America's leading journalists.

Charles Bowden, the recipient of a Lannan Literary Award and the Sidney Hillman Award, is the critically acclaimed author of numerous books, including Down by the River and Some of the Dead Are Still Breathing. He is a contributing editor for GQ and Mother Jones, and also writes for Harpers, the New York Times Book Review, Esquire, and Aperture. He lives in Tucson, Arizona.
or support indie stores by buying on
(This book is on backorder)
Copyright © 2020 American Booksellers Association