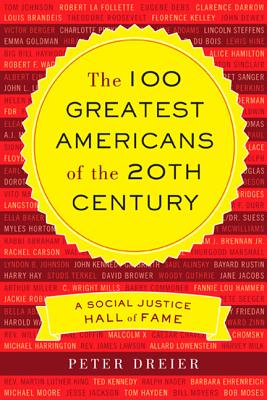 The 100 Greatest Americans of the 20th Century

A Social Justice Hall of Fame

A hundred years ago, any soapbox orator who called for women's suffrage, laws protecting the environment, an end to lynching, or a federal minimum wage was considered a utopian dreamer or a dangerous socialist. Now we take these ideas for granted -- because the radical ideas of one generation are often the common sense of the next. We all stand on the shoulders of earlier generations of radicals and reformers who challenged the status quo of their day.

Unfortunately, most Americans know little of this progressive history. It isn't taught in most high schools. You can't find it on the major television networks. In popular media, the most persistent interpreter of America's radical past is Glenn Beck, who teaches viewers a wildly inaccurate history of unions, civil rights, and the American Left.

The 100 Greatest Americans of the 20th Century, a colorful and witty history of the most influential progressive leaders of the twentieth century and beyond, is the perfect antidote.

Praise For The 100 Greatest Americans of the 20th Century: A Social Justice Hall of Fame…

“Dreier brings his 100 greatest Americans to life with pithy, dramatic and colorful biographies and presents them warts and all. … Dreier is clearly trying not only to educate readers but also provoke them to think differently about our history and to reconsider what we mean by "great." While you might not agree with Dreier's hundred, he provides an impressive case for the importance of leadership and social movements and how progressives and radicals inside and outside of the establishment made America a more livable and humane society.” Red Weather Review (online)
“Dreier, a politics professor at Occidental College, has produced a labor of love that will dazzle lefty readers and offer others insights into the lives of men and women who have dedicated themselves to fostering social change in the United States. They range from the widely celebrated Jackie Robinson and Ted Kennedy to less seemly, in-your face figures like Rev. William Sloane Coffin, the Yale chaplain and antiwar activist, and Rose Schneiderman, the young Jewish immigrant, sweatshop worker, and union organizer.”

“So the reason I got the book — I know how publishers and their publicity departments work — is that Dreier asked them to mail it to me. Expecting me to take the bait and attack the book, he could then come up with a line for an ad: “The reactionary right-wing writer Ron Radosh hates this book, so you know it has to be good,” or something along those lines. So, indeed, I accept the challenge, and henceforth will make some serious observations about what Dreier has written.” Library Journal“[T]his book openly celebrates the people behind the progressive ideas and movements that have shaped the United States and its history and that [Dreier] believes have made it a more humane and inclusive place. . . . [Of] interest to people who enjoy reading history and are interested in those who made a real difference in American progressive life.” Jack Rothman, Professor Emeritus at the UCLA School of Public Affairs, writing for the Huffington Post“The array of personages covers varied ethnic identities and ideological leanings. The narratives are crisp and readable, reflecting Professor Dreier's earlier career as a journalist. . . . With so many right-wing and callous influences saturating our culture, the book serves as a wholesome antidote.” History Wire

“[Dreier] is the kind of guest that is made for stimulating talk!”

America Magazine: The National Catholic Weekly“Since the tabloid culture trivialized public virtue by the indiscriminate use of the termhero, it is refreshing when a publication gives an overused term like greatest a sharper definition. Nation Books has published The 100 Greatest Americans of the 20th Century: A Social Justice Hall of Fame, by Peter Dreier, a distinguished professor of politics at Occidental College. Greatness, for Mr. Dreier, describes those who make the United States ‘a more just, equal and democratic society.'” San Francisco/Sacramento Book Review“This invaluable compendium will be of interest to the general reader or scholar, closing with an outstanding bibliography. [An] outstanding reference book….” Andrew Tonkovich, OC Weekly's Bookly Blog (Costa Mesa, CA)

“[F]ew will deny that the progressive subjects chosen… have stepped up to the plate for a variety of noble causes far more than the average citizen. . . . Liberals will easily find people of like mind whatever their field of interest.” Frying Pan News.org“[N]ervy… A corrective to Greatest Generation blather, Dreier's 100 profiles refract a century of progressive movements through the lives of leaders whose native radicalism helped push America toward a more humane vision of society.” ALA Booklist“Author Dreier has put his years of experience as a teacher, community organizer, government official, and journalist together to condense a century of astounding change and action into one volume. Hard decisions must have been made, but in the end, The 100 Greatest Americans of the 20th Century: A Social Justice Hall of Fame brings together names and faces from every movement and every decade. . . . Overall, a solid, if broad, entry in an ever-topical field.”

“[P]rovocatively fun. . . [T]he book is both predictably satisfying and also a discovery, with plenty of names new to this amateur Lefty history scholar—and a generous “B” list of another fifty of Dreier's favorites. . . . [I]n his clearly life and struggle-affirming collection of portraits of some of the greatest citizen-activists in the history of our republic, Peter Dreier might fool us into seeing something like progress. . . . Reading these lovely sketches, of real people (with failings, tragedies, mistakes made) he seems to me to add lightning velocity to betterness and betterhood.” Beyond Chron (San Francisco, CA)“[G]iven the current climate of rising inequality and economic unfairness, Dreier's inspiring histories of these courageous and idealistic visionaries could not have come at a better time. . . . Dreier includes enough kernels of wisdom and insights in each piece to leave readers marveling at the legacy the 100 have left.” Ron Radish, PJ Media

Kirkus Reviews
“Crisp, snappy bios of important progressive Americans in recent history. . . . A provocative collection that includes a timeline and a roster of up-and-coming contenders for a new century already showing signs of progress.”

Jonathan Kozol
“A compelling narrative of the major social justice movements of the United States and the ways that high ideals are transformed into action. I've found myself caught up in the sweep of history the book encompasses and in the richness of the details embedded in each story. Terrific reading.”

Frances Fox Piven“A great collection of gripping stories. A book you won't want to put down.” Robert Kuttner“Peter Dreier's superb book is a timely and heartening reminder that America's most valuable citizens were resolute and inventive progressives. A wonderfully written antidote to this decade's choice between centrism and defeatism.”
Nelson Lichtenstein, MacArthur Foundation Chair in History, University of California, Santa Barbara
“Skillfully crafted... a call to action for our generation and the next.”
Joe Harting, KBTK's Mitch and Joe Show

Peter Dreier is E. P. Clapp Distinguished Professor of Politics and Director of the Urban and Environmental Policy Program at Occidental College. He writes regularly for the Nation, American Prospect, Huffington Post, Los Angeles Times, and Talking Points Memo. He lives in Los Angeles, California.
Loading...
or support indie stores by buying on