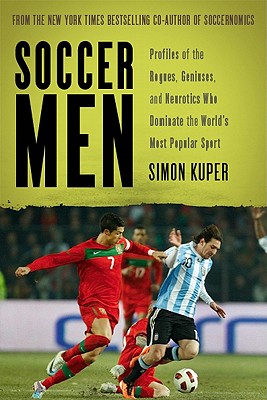 Profiles of the Rogues, Geniuses, and Neurotics Who Dominate the World's Most Popular Sport

Simon Kuper’s New York Times bestseller Soccernomics pioneered a new way of looking at soccer through meticulous empirical analysis and incisiveand witty commentary. Kuper now leaves the numbers and data behind to explore the heart and soul of the world’s most popular sport in the new, extraordinarily revealing Soccer Men.

Soccer Men goes behind the scenes with soccer’s greatest players and coaches. Inquiring into the genius and hubris of the modern game, Kuper details the lives of giants such as Arsène Wenger, Jose Mourinho, Jorge Valdano, Lionel Messi, Kaká, and Didier Drogba, describing their upbringings, the soccer cultures they grew up in, the way they play, and the baggage they bring to their relationships at work.

From one of the great sportswriters of our time, Soccer Men is a penetrating and surprising anatomy of the figures that define modern soccer.


Praise For Soccer Men: Profiles of the Rogues, Geniuses, and Neurotics Who Dominate the World's Most Popular Sport…

The Herald (UK)
“Kuper always listens, but only rarely quotes verbatim.  The [athlete] is a subject rather than a talking head.  This approach produces an excellent result… his sureness of purpose allows him to devote his energies to producing something regularly insightful and sometimes very, very funny.”

FourFourTwo Magazine(UK)
“Hugely enjoyable…Kuper’s knowledge of the global game is second only to the vitality of his writing.” The New Yorker, Book Bench Blog
“[S]prightly, skeptical, and vastly informative… Style, in soccer as in prose, is less the product of “personal expression” than of poise, discipline, patience, and infinite care. . . . Watching Messi or Lampard (or any of the players included in “Soccer Men”) after reading Kuper is a bit like going back to Shakespeare’s sonnets after reading Helen Vendler’s book on them. He turns us into more alert, more intelligent, more grateful spectators of the beautiful game.”

Alan Black, San Francisco Chronicle
“Simon Kuper’s new book, Soccer Men, gains insight into the personalities of some of soccer’s most important players and coaches with a few extras from outside the sport thrown in….Kuper is a rare breed of writer. His international upbringing conditioned his understanding of variety in the world’s most popular sport. His soccer networks across national boundaries and his access inside the game are impressive. There is no better anthropologist’s eye analyzing the game today.”

Globe and Mail (Canada)
“Eccentric but vastly enjoyable… Kuper observes, analyzes, takes notes at a press conference, reads the player’s autobiography and writes deftly incisive portraits. It’s a wise approach; most pro sports players have little to say and it’s the doing that makes them interesting, not their explanation of it.”

ESPN Soccernet
“Kuper offers a comprehensive critique of the modern footballer and tones down the holy distinctions, unreal expectations, and tabloid sensationalisms that we have reserved for the game’s world-beaters. Soccer Men finely demonstrates that the characters who occupy the highest pedestal in football’s collective imagination are ordinary men and successful professionals who all grew up playing and watching a lot of football. . . . Soccer Men is a significant collection of profiles precisely because it provides a contemporary, realistic portrait of the men who dominate our most beloved sport.”

Booklist
“[Kuper] has both keen insight into the game and a gift for getting it across.”

Financial Times
“No one else writing in the UK has tracked the careers of footballers and managers in Kuper’s fashion. He knows and cares about their family backgrounds, education and early years. He also has a rare international perspective, drawn from decades of travel around the continent and the ability to speak and read in several tongues. The chapter dissecting the ghosted autobiographies of Messrs Carragher, Cole, Gerrard, Lampard and Rooney is a masterful piece of literary criticism.”

Time Out, UK
“In his latest book, football’s finest writer [Kuper] turns his attention to succinct profiles of the great and good… As well as captivating profiles, there are some revealing interviews.”

The Independent, UK
“What is exceptional is Kuper’s insightful view of their [footballers’] world and the managers who attempt to control it… [Kuper’s] judgements are often revisionist, always well argued. If you’re looking for sleaze and sensation, this isn’t the book for you; but if stylish profiles written with wit and humour are your thing, you won’t be disappointed.”

The Irish Times, Ireland
“[Kuper] has been an astute observer of the game at both club and international level. He has an anthropologist’s eye for the telling detail, he wields a dark, deadpan humour, and he writes like a dream.”

Irish Examiner
“Britain’s most respected football writer gets up close and personal with some of the gods of the beautiful game. Kuper eschews titillating gossip for a look at how these ordinary men operate in an extraordinary, closeted world, often bringing everyday worries to their workplace.”

Birmingham Post (UK)
“Kuper’s assured hand enables him to examine footballers, managers, even stadium architects and football-loving actors from a refreshingly unique perspective. He is less interested in regurgitating predictable, PR-disinfected football-speak and more focused on treating his interviewees as subjects in their own right. It makes for a fascinating read which leaves you wondering why has no-one tried this before…Kuper succeeds in adding a classy continental polish to an extremely pleasurable read which leaves the reader wanting more.”

STV Blog (Scotland)
“[The Football Men] profiles some of the best players of the modern era, but with an insight few can match.”

The Boston Globe
“Soccer fans and fans of sharp writing and quick, dead-on profiles can be grateful that Kuper didn’t earlier tire of the chase.”

Alan Black, San Francisco Chronicle
“Simon Kuper’s new book, Soccer Men, gains insight into the personalities of some of soccer’s most important players and coaches with a few extras from outside the sport thrown in….Kuper is a rare breed of writer. His international upbringing conditioned his understanding of variety in the world’s most popular sport. His soccer networks across national boundaries and his access inside the game are impressive. There is no better anthropologist’s eye analyzing the game today.”

Simon Kuper is one of the world's leading writers on soccer. He is the coauthor of the national bestseller Soccernomics and author of Soccer Against the Enemy, which won the William Hill Prize. He is a columnist and feature writer for the Financial Times and lives in Paris.
Loading...
or
Not Currently Available for Direct Purchase