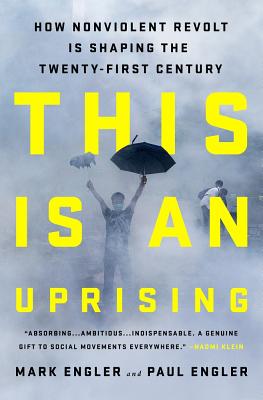 This Is an Uprising

How Nonviolent Revolt Is Shaping the Twenty-First Century

From protests around climate change and immigrant rights, to Occupy, the Arab Spring, and #BlackLivesMatter, a new generation is unleashing strategic nonviolent action to shape public debate and force political change. When mass movements erupt onto our television screens, the media consistently portrays them as being spontaneous and unpredictable. Yet, in this book, Mark and Paul Engler look at the hidden art behind such outbursts of protest, examining core principles that have been used to spark and guide moments of transformative unrest.

With incisive insights from contemporary activists, as well as fresh revelations about the work of groundbreaking figures such as Gandhi, Martin Luther King Jr., Gene Sharp, and Frances Fox Piven, the Englers show how people with few resources and little conventional influence are engineering the upheavals that are reshaping contemporary politics.

Nonviolence is usually seen simply as a philosophy or moral code. This Is an Uprising shows how it can instead be deployed as a method of political conflict, disruption, and escalation. It argues that if we are always taken by surprise by dramatic outbreaks of revolt, we pass up the chance to truly understand how social transformation happens.

Praise For This Is an Uprising: How Nonviolent Revolt Is Shaping the Twenty-First Century…

“Compellingly readable and quite timely…[The authors] deftly argue that organizers can define the terms of their own victory.” —Matt Wasserman, The Indypendent

“I picked up [This Is An Uprising], and within minutes I was engrossed… [The Englers] argue, persuasively, that… uprisings that use nonviolent confrontation have changed the world. And they have done it with such passion, intensity, and page-turning storytelling, that I had barely been able to put the book down.” —Ellen Michaud, QuakerBooks

“Anyone who doubts that community organizing is a significant part of the social fabric will find such assumptions dispelled by this intriguing and illuminating overview.” —Booklist

"Especially timely in the wake of protests across the United States, this book offers insight into how far we've come as a country and how much further we have to go." —Library Journal

“A usefully organized, concise history of social movements that will appeal to newer generations of activists.” —Kirkus Reviews

"Absorbing… Ambitious… Indispensable. A genuine gift to social movements everywhere." —Naomi Klein, author of This Changes Everything and The Shock Doctrine

"If you want to understand the social movements that are erupting all around us, you should be reading the Englers. Their writing is a revelation." —Andy Bichlbaum, The Yes Men

"Simply outstanding. The success or failure of future campaigns for peace and justice could depend on how many people read this book. Yes, it's that good." —Stephen Zunes, University of San Francisco

"This is truly an important work. The moments and movements that drive societal change have remained elusive and misunderstood by most, whether pundits, activists, or everyday people consuming the news. In This is an Uprising, Mark and Paul Engler brilliantly unearth, explain, and contextualize the dynamics of breakout mobilizations--both dispelling the popular notion that transformational progress simply arises from historical circumstance, and pushing back on long-held dogma that hinders more successful engineering of people-driven campaigns. For all those who seek to play an effective role in creating social or political change in the modern era, the Englers' book is a must read." —James Rucker, cofounder of ColorOfChange.org and Citizen Engagement Lab

"Mark Engler and Paul Engler haven't written a predictable book. The brothers have spent considerable time studying—and participating in—social movements, and their deep curiosity lends a propulsive feel to This Is An Uprising… The world is already messy and chaotic; social movements make it more so. And so a book like This Is an Uprising—crisply written, rigorous, blessedly free of clichés—is long overdue.” —Gabriel Thompson, Truthdig

"A very important book…. Indeed, anyone who is working with a group of people, no matter how small or large, which is serious about defending their rights, changing oppressive conditions, achieving justice or saving our seriously endangered environment would benefit from studying this well-researched book.” —Ted Glick, Z Magazine

"Engler & Engler carefully arrange the complex pieces of the puzzle that comprise a nonviolent movement…The authors touch on a range of issues that are certain to be of value to those most in need of such a timely work of scholarship – activists throughout the globe. In their impressive analysis and practically step-by-step account of what it takes for movements to instill change, the authors highlight the critical strategic undertones of otherwise seemingly spontaneous uprisings.” —Pauline Moore, Journal of Peace Research—-

"This book tells the stories of the mass movements that have made our world and continue to change it, and it tells them with excitement, insight, and hope like few have told them before." —Maria Elena Durazo, international union vice president for civil rights, diversity, and immigration, UNITE HERE!

"This book is the Rules for Radicals for a new generation. Mark and Paul Engler have written a defining work on the science of popular movements… A must-read for everyone fighting the battle for justice in this world." —Carlos Saavedra, lead trainer, Ayni Institute and former National Coordinator of United We Dream

"I love this book. The Englers have written fresh and exciting addition to the literature of social movements, a page-turner that is both hopeful and practical. A diversity of readers will recognize moments from their own experience in the stories, which powerfully show what is effective and what isn't in making major change. We all need to read this now." —George Lakey, author, activist, and founder of Training for Change

“Thorough and authoritative…Both as a primer on the theory of nonviolent protest and as a practical guide to positive action, [This Is An Uprising] is an invaluable resource.” —Peter Whittaker, New Internationalist

"A terrific survey of direct action strategies, bringing out many of the strengths and weaknesses of activist efforts to effect major change in the United States and around the world since well before the twenty-first century. It should be taught in every level of our schools." —David Swanson, Let's Try Democracy

“An ambitious, sweeping analysis of how uprisings do and do not bring progressive change... On issue after issue—immigrant rights, gay marriage, police shootings, protests against nuclear power to name but a few—the Englers show how and why mass protest prevailed over electoral politics. This is one of the many reasons why This is an Uprising is a worthwhile read for all activists.” —Randy Shaw, Beyond Chron

“Engler and Engler have distilled decades of complex and often discordant theories into an accessible guide to effective lasting civil resistance and organization building. This is a book that is likely to be read and reread for years to come.” —Shelf Awareness, Starred Review—-

Mark Engler, a writer based in Philadelphia, is an editorial board member at Dissent, a contributing editor at Yes! Magazine, and author of How to Rule the World: The Coming Battle Over the Global Economy (Nation Books).

Paul Engler is founding director of the Center for the Working Poor, based in Los Angeles. He worked for more than a decade as an organizer in the immigrant rights, global justice, and labor movements.
Loading...
or support indie stores by buying on
(This book is on backorder)