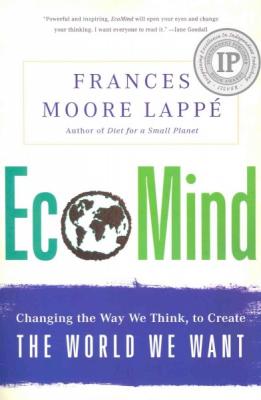 Changing the Way We Think, to Create the World We Want

In EcoMind, Frances Moore Lapp' -- a giant of the environmental movement -- confronts accepted wisdom of environmentalism. Drawing on the latest research from anthropology to neuroscience and her own field experience, she argues that the biggest challenge to human survival isn't our fossil fuel dependency, melting glaciers, or other calamities. Rather, it's our faulty way of thinking about these environmental crises that robs us of power. Lapp' dismantles seven common "thought traps" -- from limits to growth to the failings of democracy -- that belie what we now know about nature, including our own, and offers contrasting "thought leaps" that reveal our hidden power.
Like her Diet for a Small Planet classic, EcoMind is challenging, controversial and empowering.

Frances Moore Lappe is the author of 17 books and cofounder of Food First: The Institute for Food and Development Policy, the Small Planet Institute, and the Small Planet Fund. She works in Cambridge, Massachusetts.

Praise For EcoMind: Changing the Way We Think, to Create the World We Want…

Peter Barnes, author of Capitalism 3.0: A Guide to Reclaiming the Commons

"Lappé shows how by seeing the big picture we can change it. It's a clarion call in this rising age of rising despair."

"Frances Moore Lappé has done it again. As she has done so insightfully with respect to food, hunger, and democracy, Lappé now turns her sights on the contemporary ecological crises. Her accessible and provocative analysis demonstrates how the ways many people think and talk about these crises – especially the dominant narratives of scarcity – obscure the inequalities of power that lie at the root of these crises and inhibit rather than inspire the kind of effective movements necessary to confront them. EcoMind  is a profound  example of how analysis breeds not paralysis but rather informed and inspired action, and is on track to do so in the 21st century just like Diet for a Small Planet  and Food First did in the 20th.