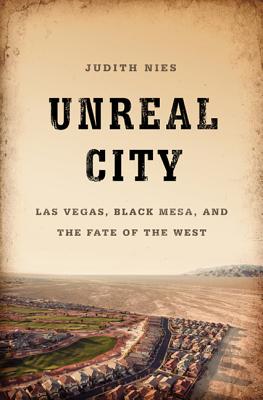 Las Vegas, Black Mesa, and the Fate of the West

An epic struggle over land, water, and power is erupting in the American West and the halls of Washington, DC. It began when a 4,000-square-mile area of Arizona desert called Black Mesa was divided between the Hopi and Navajo tribes. To the outside world, it was a land struggle between two fractious Indian tribes; to political insiders and energy corporations, it was a divide-and-conquer play for the 21 billion tons of coal beneath Black Mesa. Today, that coal powers cheap electricity for Los Angeles, a new water aqueduct into Phoenix, and the neon dazzle of Las Vegas.

Journalist and historian Judith Nies has been tracking this story for nearly four decades. She follows the money and tells us the true story of wealth and water, mendacity, and corruption at the highest levels of business and government. Amid the backdrop of the breathtaking desert landscape, Unreal City shows five cultures colliding -- Hopi, Navajo, global energy corporations, Mormons, and US government agencies -- resulting in a battle over resources and the future of the West.

Las Vegas may attract 39 million visitors a year, but the tourists mesmerized by the dancing water fountains at the Bellagio don't ask where the water comes from. They don't see a city with the nation's highest rates of foreclosure, unemployment, and suicide. They don't see the astonishing drop in the water level of Lake Mead -- where Sin City gets 90 percent of its water supply.

Nies shows how the struggle over Black Mesa lands is an example of a global phenomenon in which giant transnational corporations have the power to separate indigenous people from their energy-rich lands with the help of host governments. Unreal City explores how and why resources have been taken from native lands, what it means in an era of climate change, and why, in this city divorced from nature, the only thing more powerful than money is water.

Praise For Unreal City: Las Vegas, Black Mesa, and the Fate of the West…

“In this cautionary tale of money and power, Judith Nies has created a heart-wrenching account of the exploited American West—its resources and its people. Unreal City exposes the strange bedfellows and revolving doors that fuel crony capitalism. At the heart of it all is the public-private plunder that has sadly become the nation's new normal, and the tragic toll it takes on everything in its path. Unsettlingly reminiscent of Polanski's Chinatown, it is a brave undertaking.” —Sally Denton, investigative reporter, historian, and author of The Money and the Power: The Making of Las Vegas and Its Hold on America

“This book is blood-boilingly splendid. Meticulously reported and shocking in detail, Unreal City brilliantly dissolves the fraudulently spun myths of the American West to reveal a grim, heartbreaking progression of despoliation, waste, corruption, and betrayal of native peoples. This is the reality behind the insatiable Western Sunbelt and that desert chimera, Las Vegas. Throughout, Judith Nies brings scorching, revelatory light to the biggest undertold issue in America, the destruction of the West by unchained greed.” —Katherine A. Powers, recipient of the National Book Critics Circle Nona Balakian Citation for Excellence in Reviewing

An Amazon.com Best Book of the Year

"Nies' great triumph is to emphatically bring the 'bloody nuisance' of the story behind the growth of the West to the public eye. Her book is essential reading for those seeking to understand the largely hidden history and the forgotten deals and injustices that keep Las Vegas and Los Angeles glimmering." —Hector Tobar, Los Angeles Times

"Judith Nies' history of the region and brutal political maneuvering that helped facilitate the rise of Phoenix, Las Vegas and Los Angeles is thoroughly engaging and at times heartbreaking… this is the real American hustle.”—Las Vegas Review-Journals

“A hard-hitting chronicle of the hidden history behind the creation of Las Vegas… An important, multifaceted page-turner.” —Kirkus Reviews

"If you're headed to Las Vegas for vacation, pack this book along. In between visits to the giant pyramids and faux Manhattans, read it to get a real understanding of exactly how fragile this mirage is." —Bill McKibben, author Wandering Home: A Long Walk Across America's Most Hopeful Landscape

Judith Nies is the award-winning author of three nonfiction books -- The Girl I Left Behind: A Personal History of the 1960s, Nine Women: Portraits from the American Radical Tradition, and Native American History: A Chronology, which won the Phi Alpha Theta prize in international history. Nies's journalism, book reviews, and essays have appeared in the New York Times, the Boston Globe, Orion, Harvard Review, Women's Review of Books, and American Voice. She lives in Cambridge, Massachusetts.
Loading...
or
Not Currently Available for Direct Purchase