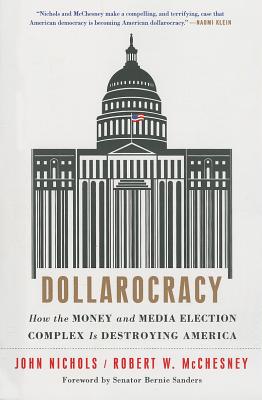 How the Money and Media Election Complex is Destroying America

Fresh from the first 10 billion election campaign, two award-winning authors show how unbridled campaign spending defines our politics and, failing a dramatic intervention, signals the end of our democracy.

Blending vivid reporting from the 2012 campaign trail and deep perspective from decades covering American and international media and politics, political journalist John Nichols and media critic Robert W. McChesney explain how US elections are becoming controlled, predictable enterprises that are managed by a new class of consultants who wield millions of dollars and define our politics as never before. As the money gets bigger -- especially after the Citizens United ruling -- and journalism, a core check and balance on the government, declines, American citizens are in danger of becoming less informed and more open to manipulation. With groundbreaking behind-the-scenes reporting and staggering new research on "the money power," Dollarocracy shows that this new power does not just endanger electoral politics; it is a challenge to the DNA of American democracy itself.

John Nichols is the national affairs writer for the Nation magazine and a contributing writer for the Progressive and In These Times. He is also the associate editor of the Capital Times, the daily newspaper in Madison, Wisconsin, and a cofounder of the media-reform group Free Press. A frequent commentator on American politics and media, he has appeared often on MSNBC, NPR, BBC and regularly lectures at major universities on presidential administrations and executive power. The author of ten books and has earned numerous awards for his investigative reports, including groundbreaking examinations (in collaboration with the Center for Media and Democracy) of the Koch brothers and the American Legislative Exchange Council.

Robert W. McChesney is the Gutgsell Endowed Professor in the Department of Communication at the University of Illinois at Urbana-Champaign and the author or editor of sixteen books. He is the President and co-founder of Free Press, a national media reform organization. He lives in Madison, Wisconsin, and Champaign, Illinois.
Loading...
or support indie stores by buying on