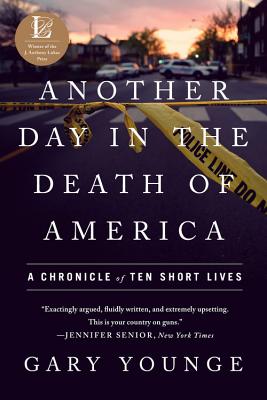 Another Day in the Death of America (Paperback)

A Chronicle of Ten Short Lives

A timely chronicle of what is now an ordinary day in America, where gun violence regularly takes the lives of children and teens, and leaves shattered families in its wake.

Winner of the 2017 J. Anthony Lukas Prize
Shortlisted for the 2017 Hurston/Wright Foundation Award
Finalist for the 2017 Helen Bernstein Book Award for Excellence in Journalism
Longlisted for the 2017 Andrew Carnegie Medal for Excellence in Non Fiction
On an average day in America, seven children and teens will be shot dead. In Another Day in the Death of America, award-winning journalist Gary Younge tells the stories of the lives lost during one such day. It could have been any day, but he chose November 23, 2013. Black, white, and Latino, aged nine to nineteen, they fell at sleepovers, on street corners, in stairwells, and on their own doorsteps. From the rural Midwest to the barrios of Texas, the narrative crisscrosses the country over a period of twenty-four hours to reveal the full human stories behind the gun-violence statistics and the brief mentions in local papers of lives lost.

This powerful and moving work puts a human face-a child's face-on the "collateral damage" of gun deaths across the country. This is not a book about gun control, but about what happens in a country where it does not exist. What emerges in these pages is a searing and urgent portrait of youth, family, and firearms in America today.

Gary Younge, an Alfred Knobler Fellow at the Nation Institute, is an award-winning columnist for the Guardian and Nation and an acclaimed author. In 2009 he won the British James Cameron award for his coverage of the 2008 presidential election, and in 2015 he won the Foreign Commentator of the Year Award. His most recent book is The Speech: The Story Behind Dr. Martin Luther King Jr.'s Dream. His previous books include Who Are We - and Should it Matter in the Twenty-First Century?, Stranger in a Strange Land: Encounters in the Disunited States, and No Place Like Home: A Black Briton's Journey through the American South. Formerly the Belle Zeller Visiting Professor of public policy and social administration at Brooklyn College, CUNY, he has two honorary degrees from British universities.

Praise For Another Day in the Death of America: A Chronicle of Ten Short Lives…

"...a powerful and necessary accounting of one of the deadliest epidemics ever to sweep across America-and a call to action to do something about gun violence. Younge's writing is chilling, urgent and profound; his reportage deeply personalizes the victims, making them come alive through the memories of those who knew them during their short lives." --The Root

"Younge brings a clear-eyed perspective to this fraught topic... A heartrending compendium of the lives of American children taken by guns on an average day. Gripping and eloquent yet challenging in the brutality of its subject, this important book calls for empathy and should be widely read." --Library Journal, Starred Review

"A heart-rending, beautifully crafted book...Important, deeply affecting, and certain to alarm readers who care about the lives of children in a gun-ridden society." --Kirkus Reviews, Starred Review

"Heartbreaking, compelling and inspiring, this is a strong voice for the victims of many devastatingly silent, daily tragedies." --Shelf Awareness, Starred Review

"This book is a righteous challenge to the big insanities of American society: gun ubiquity, racism, poverty, and the supine and bland media that taboos genuine discourse on them. It's all the more daring and subversive for its controlled and mannered tone as it breaks the unwritten law: thou shall not humanize the victims of this ongoing carnage." --Irvine Welsh, author of Trainspotting

"Another Day in the Death of America is the kind of book that instantly changes you. There's no way to walk away from these ten stories of children who were all victims of gun violence on the same day and not feel the heat of anger and despair about the gun culture that creates a seemingly inescapable cycle of violence in America. Gary Younge trains his considerable talents on one day, that could have been any of our bullet and blood filled days, and sketches the lives of the real people who suffer so much for our inability to act. We need to know them." --Mychal Denzel Smith, author of Invisible Man Got The Whole World Watching

"...exactingly argued, fluidly written and extremely upsetting. This is your country on guns. A book like this has potential pitfalls, highhandedness not least among them. But Mr. Younge...makes for a personable, unusual narrator. As a Briton, he brings a fresh perspective to this topic. As a father and a man of Barbadian descent, his interest in it is also personal." --New York Times

"...a sharp portrait of America, painted in blood." --The Economist

"Sad, frustrating, but profoundly humane and ultimately illuminating, Another Day is political writing at its best." --Oprah Magazine

"An often unbearable act of bearing witness...it's impossible to pretend we don't have a problem when we lose 10 young people in one day." --Boston Globe

"...a book that feels both timely and utterly, hopelessly timeless..." --Financial Times

"A subtle yet searing condemnation of U.S. gun culture & indifference to endemic gun violence." --The Atlantic

"A masterclass in journalism..." --The Spectator (UK)

"In thoughtful, evenhanded chapters stacked with footnotes, Younge works methodically to uncover the unique patterns and hypocrisies of his adopted second home....'Another Day' doesn't offer solutions, because it can't; it just makes it impossible not to care." --Entertainment Weekly

"This is Gary Younge's masterwork: you will never read news reports about gun violence the same way again. Brilliantly reported, quietly indignant and utterly gripping. A book to be read through tears." --Naomi Klein, author of This Changes Everything and The Shock Doctrine

"Gary Younge's Another Day in the Death of America is a harrowing account of children's lives cut short by the ubiquity of violence in the United States. Drawn from suburbs and cities of every demographic, these sensitively researched portraits of virtually unknown victims and their grieving families expose the structural ties of race, class, and lack of gun control. Younge's book completes the picture of what violence looks like in contemporary America, and should be required reading for anyone naming themselves American." --Claudia Rankine, author of Citizen

"[Younge provides] nuance and context to a polarizing issue...The personal touches, however, are most affecting, as Younge pieces together each story from news reports and interviews with friends and family, weaving a tragic narrative of wasted potential." --Publishers Weekly

"A heartrending compendium of the lives of American children taken by guns on an average day. Gripping and eloquent yet challenging in the brutality of its subject, this important book calls for empathy and should be widely read." --Library Journal, Starred Review

"Gun control remains one of the most polarizing topics in America. To give a human face to the issue, Younge, editor-at-large for The Guardian, investigates the stories of 10 people who died by gunshot on a random day-November 23, 2013...Younge states that "researching and writing this book has made me want to scream." Most readers will feel that way reading it, as there are no easy fixes here." --Booklist

"A sobering exploration...Younge has produced a deeply nuanced portrait of the social, racial and economic forces behind the daily carnage of gun deaths in America."—Chris Serres, Minneapolis Star Tribune

"By focusing on just one day, and the ten young American lives cut short on that day by gun violence, Gary Younge delivers a searing, beautifully-written indictment of gun culture in America. An important reminder that the toll of America's ridiculous gun laws results in daily tragedies that go largely unnoticed. An important book."—Peter Swanson, author of The Kind Worth Killing

"Gary Younge's Another Day in the Death of America is a book everyone would wish didn't have to be written. That Gary Younge, one of the very finest journalists we have, has drawn from one specific, random day in our country the deaths perpetuated by gunfire - given it human dimension and tragedy - makes this vital, urgent necessary book one to read and pay heed to. This brave book, in its place as witness, looks our gun sickness straight in the eye to pose the question, do any lives matter?"—Rick Simonson, Elliott Bay Book Company

"Another Day in the Death of America is that rarest of things: a truly necessary book. Younge's compassion, as much as his willingness to look this perpetual tragedy in the face, sets the book apart from much of the writing about our disastrous obsession with guns. I found it utterly heartbreaking and urgent. I want everyone to read this."—Stephen Sparks, Green Apple Books
or
Buy Here
Copyright © 2020 American Booksellers Association