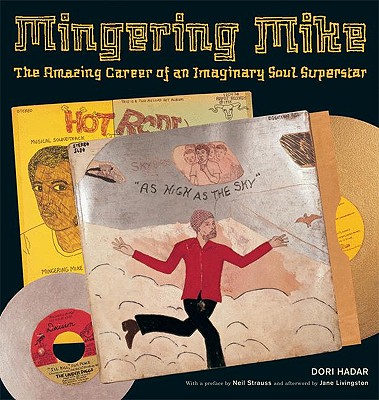 One cold December morning, Dori HadarDJ by night, criminal investigator by daywas digging through crates of records at a flea market in Washington, D.C. There he stumbled into the elaborate world of Mingering Mikea soul superstar of the 1960s and '70s who released an astonishing 50 albums and at least as many singles in just 10 years. But Hadar had never heard of him, and he realized why on closer inspection: every album in the crates was made of cardboard. Each package was intricately crafted, complete with gatefold interiors, extensive liner notes, and grooves drawn onto the "vinyl." Some albums were even covered in shrinkwrap, as if purchased at actual record stores. The crates contained nearly 200 LPs and 45s by Mingering Mike, as well as other artists like Joseph War, the Big "D," and Rambling Ralph, on labels such as Sex Records, Decision, and Ming/War. There werealso soundtracks to imaginary films, a benefit album for sickle cell anemia, and a tribute to Bruce Lee.

Hadar put his detective skills to work and soon found himself at the door of the elusive man responsible for this alternate universe of funk. Their friendship blossomed and Mike revealed the story of his life and his many albums, hit singles, and movie soundtracks. A solitary boy raised by his brothers, sisters, and cousins, Mike lost himself in a world of his own imaginary superstardom, basing songs and albums on his and his family's experiences. Early teenage songs obsessed with love and heartache soon gave way to social themes surrounding the turbulent era of civil rights protests and political upheavalbrought even closer to home when Mike himself went underground dodging the Vietnam War.

In Mingering Mike, Hadar tells the story of a man and his myth: the kid who dreamed of being a star and the fantastical "careers" of the artists he created. All of Mingering Mike's best albums and 45s are presented in full color, finally bringing to the star the adoring audience he always imagined he had.

Dori Hadar is an avid vinyl junkie and can be found scavenging the crates of flea markets in and around Washington, D.C. He is a DJ by night, specializing in funk, soul, and hip hop and a criminal investigator by day.

Jane Livingston is an independent curator specializing in outsider art. She has contributed to catalogs for exhibitions such as The Quilts of Gee's Bend, Joan Mitchell, and Richard Diebenkorn.

Neil Strauss is a former columnist for the New York Times and the author of The Game: Penetrating the Secret Society of Pickup Artists.
Loading...
or
Not Currently Available for Direct Purchase