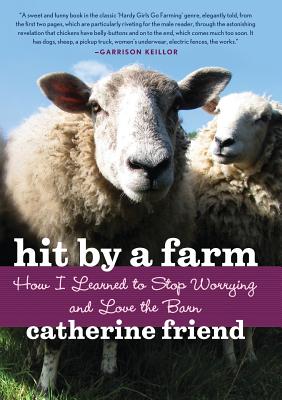 Hit by a Farm

How I Learned to Stop Worrying and Love the Barn

Farms have fences. People have boundaries. Mine began crumbling the day I knelt behind a male sheep, reached between his legs, and squeezed his testicles. This took place one blustery November day when I joined other shepherd-wannabees for a class on the basics of raising sheep. I was there with my partner Melissa, the woman I'd lived with for twelve years, because we were going to start a farm . When self-confessed "urban bookworm" Catherine Friend's partner of twelve years decides she wants to fulfill her lifelong dream of owning a farm, Catherine agrees. What ensues is a crash course in both living off and with the land that ultimately allows Catherine to help fulfill Melissa's dreams while not losing sight of her own. Hit by a Farm is a hilarious recounting of Catherine and Melissa's trials of "getting back to the land." It is also a coming-of (middle)-age story of a woman trying to cross the divide between who she is and who she wants to be, and the story of a couple who say "goodbye city life" — and learn more than they ever bargained for about love, land, and yes, sheep sex.

Catherine Friend is the author of Hit by a Farm and The Compassionate Carnivore, as well as several children's books and novels. She farms in Minnesota with her partner of twenty-eight years.
Loading...
or support indie stores by buying on