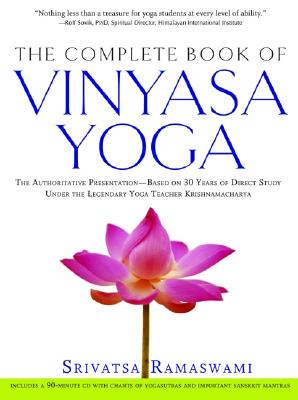 The Complete Book of Vinyasa Yoga

Sri T. Krishnamacharya (1888-1989) was the most influential figure in the last 100 years in the field of yoga. Many of today's best-known yoga teachers-including his brother-in-law B. K. S. Iyengar, his son T. K. V. Desikachar, and Pattabhi Jois, founder of Ashtanga yoga-studied with him and modeled their own yoga styles after his practice and teaching. Yet, despite his renowned status, Krishnamacharya's wisdom has never before been made completely available, just as he taught it. Now, in The Complete Book of Vinyasa Yoga, Srivatsa Ramaswami-Krishnamacharya's longest-standing student outside his own family-presents his master's teachings of yogasanas in unprecedented detail.

Drawing upon his 33 years of direct study, beginning in 1955 and continuing nearly until his teacher's death, Ramaswami presents more than nine hundred poses and variations in logically structured sequences, precisely describing Krishnamacharya's complete Vinyasakrama system. Along with every movement of each yoga posture, he covers the proper breathing techniques for each pose-something no other book also derived from Krishnamacharya's teaching does. Nearly 1,000 full-color photographs are featured in this authoritative landmark presentation of the study practiced by the "grandfather of modern yoga."

Srivatsa Ramaswami studied yoga with the legendary Sri. T. Krishnamacharya for more then thirty years and had taught Krishnamacharya's vinyasa yoga for more than twenty years in India and the United States. He has extensive knowledge of the classic yoga texts; is the author of The Complete Book of Vinyasa Yoga, Yoga for the Three Stages of Life, and countless yoga articles; and has made more than thirty-five recordings of Sanskrit mantras.
Loading...
or
Not Currently Available for Direct Purchase