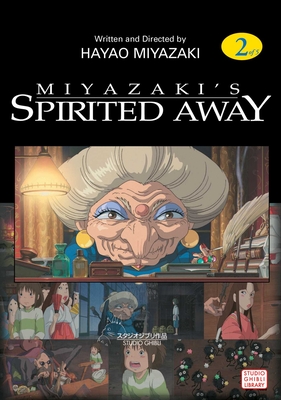 Winner of the 2002 Academy Award for Best Animated feature, Spirited Away tells the story of 10-year-old Chihiro, a girl in the midst of a move to the suburbs who wanders into a strange town and finds a world of spirits ruled over by the mysterious Yubaba.

Into the boiler room! Chihiro encounters the old arachnoid Kamaji and his bizarre army of soot balls who keep the hot water running. Chihiro tries to help but she's not really suited for this kind of work. When Lin the slug girl comes to deliver lunch, though, Kamaji tells her to take Chihiro with her. Lin introduces Chihiro to the bizarre bath house wonderland where she works, and to her boss, the giant-size matriarch Yubaba. After a deomonstration of her powers, Yubaba renames Chihiro "Sen," and puts her to work. Sen goes through a grueling first day of scrubbing floors and being made fun of by the other workers for being human, but she forges on. In the middle of the day, while everyone's asleep, she sneaks outside to meet Haku...