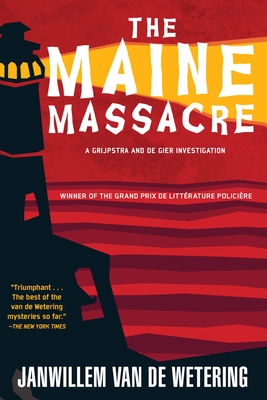 The accidental death of his brother-in-law sends the commissaris to the secluded town of Jameson, Maine. De Gier goes along to see the United States. But there has been a sinister pattern of deaths in the area, and the two find themselves neck-deep in a murder investigation involving shady real estate deals, with a townful of suspects and the icy breath of a cold-blooded killer stalking their every move.

Praise for The Maine Massacre

“Triumphant . . . The best of the van de Wetering mysteries so far.”
—The New York Times

"Mr. Van de Wetering's policemen are just as likely to . . . marvel at human nature as to shoot it down."
—The New York Times

"[Van de Wetering] is doing what Simenon might have done if Albert Camus had sublet his skull."
—John Leonard

"What makes this series so engaging is that the policemen are as quirky and complicated as the criminals."
—The Washington Post

Janwillem van de Wetering (1931–2008) was born and raised in Rotterdam, but lived most recently in Surry, Maine. He served as a member of the Amsterdam Special Constabulary and was once a Zen Buddhist monk. He is renowned for his detective fiction, including Outsider in Amsterdam, The Corpse on the Dike, The Japanese Corpse, and eleven other books in the Grijpstra and de Gier series.
Loading...
or
Not Currently Available for Direct Purchase