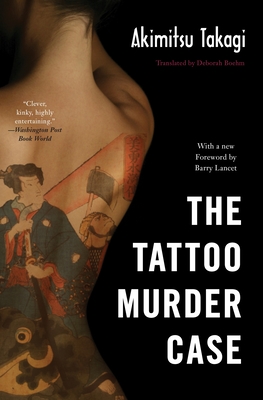 Kinue Nomura survived World War II only to be murdered in Tokyo, her severed limbs discovered in a room locked from the inside. Gone is the part of her that bore one of the most beautiful full-body tattoos ever rendered. Kenzo Matsushita, a young doctor who was first to discover the crime scene, feels compelled to assist his detective brother, who is in charge of the case. But Kenzo has a secret: he was Kinue’s lover, and soon his involvement in the investigation becomes as twisted and complex as the writhing snakes that once adorned Kinue’s torso.

The Tattoo Murder Case was originally published in 1948; this is the first English translation.

Praise For The Tattoo Murder Case…

Praise for The Tattoo Murder Case

“Like voyeurs, we follow Takagi down the charred streets of bombed-out Tokyo to scenes of fastidiously executed decadence . . . [A] tale of sexual obsession and perversity.”
—The New York Times Book Review

"The Tattoo Murder Case is a delightful, different book, not only because of its unusual setting and premise, but because Takagi is a powerful plotter and constructor of fascinating, complex characters. Introducing American audiences to great foreign mysteries (as well as unusual domestic voices) has become a Soho Press trademark, and almost everything in its catalog is top-notch. The Tattoo Murder Case is a high-water mark even by those high standards."
—The A.V. Club

Akimitsu Takagi (1920–1995) studied engineering at Kyoto University and later worked for the Nakajima Aircraft Company. Over the course of his writing career, he published fifteen popular mysteries, including Honeymoon to Nowhere, The Informer, and The Tattoo Murder Case, and he won the Japan Mystery Writers Club Award.
Loading...
or
Not Currently Available for Direct Purchase