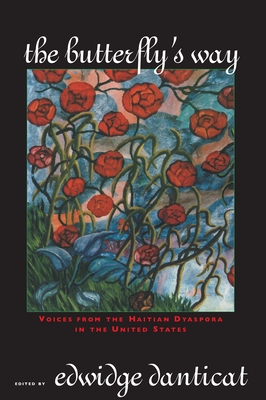 Voices from the Haitian Dyaspora in the United States

In five sections—Childhood, Migration, Half/First Generation, Return, and Future—the thirty-three contributors to this anthology write movingly, often hauntingly, of their lives in Haiti and the United States. Their dyaspora, much like a butterfly's fluctuating path, is a shifting landscape in which there is much travel between two worlds, between their place of origin and their adopted land.

This compilation of essays and poetry brings together Haitian-Americans of different generations and backgrounds, linking the voices for whom English is a first language and others whose dreams will always be in French and Kreyòl. Community activists, scholars, visual artists and filmmakers join renowned journalists, poets, novelists and memoirists to produce a poignant portrayal of lives in transition.

Edwidge Danticat, in her powerful introduction, pays tribute to Jean Dominique, a sometime participant in the Haitian dyaspora and a recent martyr to Haiti's troubled politics, and the many members of the dyaspora who refused to be silenced. Their stories confidently and passionately illustrate the joys and heartaches, hopes and aspirations of a relatively new group of immigrants belonging to two countries that have each at times maligned and embraced them.

Praise For The Butterfly's Way: Voices from the Haitian Dyaspora in the United States…

Praise for The Butterfly’s Way

“A volume that movingly describes the various facets of the Haitian migration experience . . . The Butterfly’s Way is the story of a people in transition, struggling to find a comfort zone between their land of origin and their land(s) of resettlement. It provides powerful images of the inner souls of displaced persons, living between two worlds and carrying a heavy baggage of things past.”
—Afro-Hispanic Review

“An assembly of writings by writers of Haitian descent—the first of its kind . . . An astonishing, stirring addition not only to the heretofore thin canon of Haitian-American literature, but to American literature. Period.”
—Research in African Literatures

“Varied, colorful, and interesting . . . Whether [the writers] are discussing childhood memories, interracial relationships, or returning home, their comments are always illuminating.”
—Library Journal

“A potent and piercing collection of essays and poems that articulate the frustrations and sorrows of Haitians who are now outsiders both in Haiti and in their places of refuge.” —Booklist