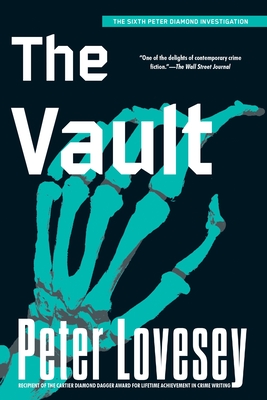 A skeletal hand is unearthed in the vault under the Pump Room in Bath, England, near the site where Mary Shelley wrote Frankenstein. Then a skull is excavated. The bones came from different corpses, and one is modern. Detective Superintendent Peter Diamond must solve a series of crimes including murder and forgery, requiring a knowledge of history, nineteenth century art, literature . . . and human nature.

Praise For The Vault (A Detective Peter Diamond Mystery #6)…

Praise for The Vault

“One of the delights of contemporary crime fiction.”
—The Wall Street Journal

“The story crackles with wit and urbanity, snappy dialogue and deeper, fouler doings . . . A stunning tale of the macabre and the mundane.”
—Publishers Weekly, Starred Review

“Diamond hunts for a missing professor on the trail of Mary Shelley’s diary. Lovesey interweaves the two stories with effortless skill.”
—The Times

“It looks deceptively easy, but this is an author who excels at his craft and keeps coming up with books that entertain and puzzle.”
—Sunday Telegraph

Praise for The Peter Diamond series