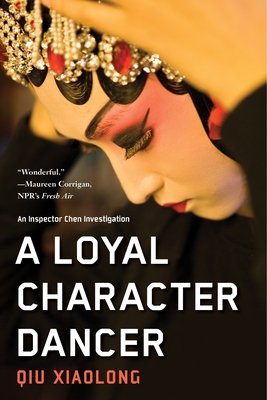 The second book in the Inspector Chen investigations

Inspector Chen’s mentor in the Shanghai Police Bureau has assigned him to escort US Marshal Catherine Rohn. Her mission is to bring Wen, the wife of a witness in an important criminal trial, to the United States. Inspector Rohn is already en route when Chen learns that Wen has unaccountably vanished from her village in Fujian. Or is this just what he is supposed to believe? Chen resents his role; he would rather investigate the triad killing in Shanghai’s beautiful Bund Park. Li insists that saving face with Inspector Rohn takes priority. So Chen Cao, the ambitious son of a father who imbued him with Confucian precepts, must tread warily as he tries once again to be a good cop, a good man and also a loyal Party member.

Qiu Xiaolong, a prizewinning poet and critic in China, now teaches at Washington University in St. Louis, where he lives with his wife and daughter. His critically acclaimed Inspector Chen mystery series has sold over a million copies and has been published in twenty languages.

Praise For A Loyal Character Dancer (An Inspector Chen Investigation #2)…

“A luminescent synthesis of a thriller and a literary novel.”
—The Independent

“A sequel that in many ways is even more impressive [than the original] . . . we begin to realize that Chen is ideally suited not only to police work but also to the fine art of political survival. [Qiu] has moved from the poetic, exotic milieu of his first book (although plenty of both elements remain) into a tougher, wider, probably more commercial and modern vision of China as seen by America.”
—Chicago Tribune

“The travelogue aspects of this novel don't overwhelm its critical intelligence. The murder and mayhem provide a cover story for a larger investigation of social mysteries—in this case the fate of educated Chinese, many of whose lives were made a waking nightmare by the cultural revolution, and the future of Chinese communism itself.”
—Chicago Sun-Times

“With strong and subtle characterisation, Qiu Xiaolong draws us into a fascinating world where the greatest mystery revealed is the mystery of present-day China itself.”
—John Harvey

“Qiu's books carry satisfying characterisations and a ring of authenticity about life in China.”
—Japan Times

“Unusual in [its] vivid sense of an author exploring an alien genre, fusing it with Chinese literary traditions and taking it with him to strange new places . . . Chen's life is a delicate dance between trying to be an honest cop and trying to stay on the right side of the party.”
—January Magazine

“Intriguing . . . The characters manage to achieve an engaging realism and charm, even while showing the underside of China in transition.”
—Publishers Weekly

“Engrossing insights into contemporary China in an intricate mystery.”
—Booklist

“When I read Qiu Xiaolong's Death of a Red Heroine, I was enchanted . . . Now, with A Loyal Character Dancer, Qiu has given us an even more lyrically written, wide-ranging, bittersweet story.”
—S.J. Rozan, Mystery News

“The sequel to Death of a Red Heroine, which won the Anthony in 2001 for best debut novel, Qiu Xiaolong's latest mystery is another winner . . . If you like mysteries with both a brain and heart, read A Loyal Character Dancer.”
—Rocky Mountain News