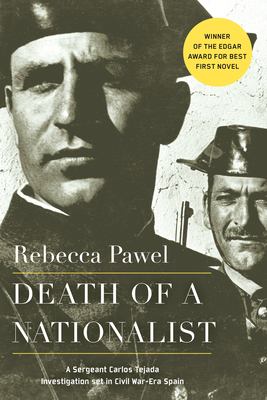 Madrid 1939. Carlos Tejada Alonso y León is a Sergeant in the Guardia Civil, a rank rare for a man not yet thirty, but Tejada is an unusual recruit. The bitter civil war between the Nationalists and the Republicans has interrupted his legal studies in Salamanca. Second son of a conservative Southern family of landowners, he is an enthusiast for the Catholic Franquista cause, a dedicated, and now triumphant, Nationalist.

This war has drawn international attention. In a dress rehearsal for World War II, fascists support the Nationalists, while communists have come to the aid of the Republicans. Atrocities have devastated both sides. It is at this moment, when the Republicans have surrendered, and the Guardia Civil has begun to impose order in the ruins of Madrid, that Tejada finds the body of his best friend, a hero of the siege of Toledo, shot to death on a street named Amor de Dios. Naturally, a Red is suspected. And it is easy for Tejada to assume that the woman caught kneeling over the body is the killer. But when his doubts are aroused, he cannot help seeking justice.

Praise For Death of a Nationalist (Sergeant Tejada Investigations #1)…

Praise for Death of a Nationalist

"Pawel anchors a tense and exciting story with a terrific and complex plot."
—Detroit Free Press

"An intriguing tale amid the gloom of war-torn Madrid. It is a humane and moving portrait of a divided people coming to grips with the virtues of enemies and the villainy of friends."
—Dan Fesperman

"[Pawel] turns the clock back to 1939 and Madrid’s tumultuous past . . . An intriguing juxtaposition of the political and the personal."
—Kirkus Reviews

Rebecca Pawel lives in New York City and is pursuing a PhD in English and Comparative Literature at Columbia University. Her widely praised first novel, Death of a Nationalist, won the Edgar Award for Best First Novel and was a Los Angeles Times Book Prize finalist, as well as a best book of the year in the Chicago Tribune, Publishers Weekly and Detroit Free Press.
Loading...
or
Not Currently Available for Direct Purchase