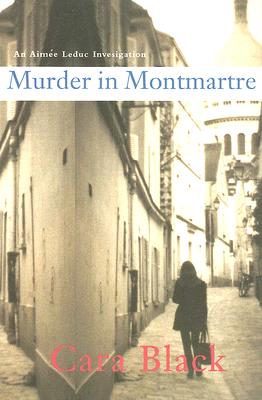 Aimée’s childhood friend, Laure, is a policewoman. Her partner, Jacques, has set up a meeting in Montmartre with an informer. When Laure reluctantly goes along as backup, Jacques is lured to an icy rooftop, where he is shot to death. Laure’s gun has been fired, gunpowder residue is found on her hands, and she is charged with her partner’s murder.

The police close ranks against the alleged cop killer. Aimée is determined to clear Laure. In doing so, she encounters separatist terrorists, Montmartre prostitutes, a surrealist painter’s stepdaughter, a crooked Corsican bar owner, and learns of “Big Ears”—the French “ear in the sky” that records telephonic and electronic communications—which the Security Services monitor. Identifying Jacques’ murderer brings her closer to solving her own father’s death in an explosion in the Place Vendôme years earlier. It still haunts her. She cannot rest until she finds out who was responsible.

Cara Black is the author of eleven book in the bestselling Aimee Leduc series, all of which are available from Soho Crime. She lives in San Francisco with her husband and son and visits Paris frequently. "From the Trade Paperback edition."

Praise For Murder in Montmartre…

“Chilling. . . . The book vividly depicts a gritty, working-class part of Paris. . . . Black succeeds in making the reader feel the damp, the snow, the fear.”—Publishers Weekly

“I always wondered why I used to quicken my step in Montmartre. After reading Cara Black’s wonderful book, now I know. As atmospheric as anything by John le Carré.”—Philip Kerr, author of Berlin Noir

Praise for the Aimée Leduc series:

“Fine characters, good suspense, but, best of all, they are transcendentally, seductively, irresistibly French. If you can’t go, these will do fine. Or, better, go and bring them with you.”—Alan Furst

“She makes Paris come alive as no one else has since Georges Simenon.”—Stuart Kaminsky

“If you’ve never been to Paris, or you’d like to go back soon, let Cara Black transport you there.”—Linda Fairstein

“Charming. . . . Aimée is one of those blithe spirits who can walk you through the city’s historical streets and byways with their eyes closed.”—The New York Times Book Review