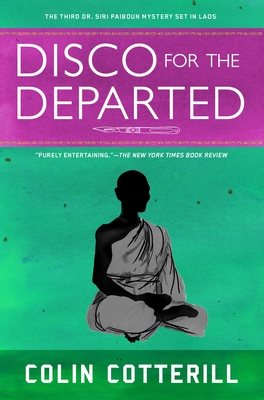 Disco for the Departed (A Dr. Siri Paiboun Mystery #3)

Dr Siri Paiboun, reluctant national coroner of the People’s Democratic Republic of Laos, is summoned to a remote location in the mountains of Huaphan Province, where for years the leaders of the current government had hidden out in caves, waiting to assume power. Now, as a major celebration of the new regime is scheduled to take place, an arm is found protruding from the concrete walk that was laid from the President’s former cave hideout to his new house beneath the cliffs. Dr Siri is ordered to supervise the disinterment of the body attached to the arm, identify the corpse, and discover how he died.

Praise For Disco for the Departed (A Dr. Siri Paiboun Mystery #3)…

Praise for Disco for the Departed

“From now on, I’ll even think twice about applying the escapist label to something as purely entertaining as Colin Cotterill’s 1970s period mysteries about that sweetest of sleuths, Dr. Siri Paiboun . . . As the author gently points out, life would be dreary without a few thrills.”
—The New York Times Book Review

“Cotterill’s writing is both evocative and educational.”
—Entertainment Weekly

“Readers who enjoy Eliot Pattison’s Asian thrillers . . . will find that Cotterill shares the same sardonic view of Asian communism mixed with a touch of mysticism . . . a quality that sets the work of both authors apart from most mystery fare.”
—Library Journal, Starred Review

Colin Cotterill is the Dilys Award-winning author of nine books in the Dr. Siri Paiboun series: The Coroner's Lunch, Thirty-Three Teeth, Disco for the Departed, Anarchy and Old Dogs, Curse of the Pogo Stick, The Merry Misogynist, Love Songs from a Shallow Grave, and Slash & Burn, and The Woman Who Wouldn't Die. He lives in Chumphon, Thailand, with his wife and five deranged dogs.
Loading...
or
Not Currently Available for Direct Purchase