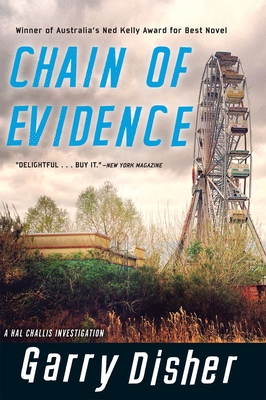 Winner of the Ned Kelly Award for Best Novel

Inspector Hal Challis has been summoned to his boyhood home, Mawson’s Bluff in the Australian Outback, where his father is dying. There his past comes back to haunt him . . . and endanger his life. Meanwhile, a serial pedophile is on the loose on the Mornington Peninsula, and Sergeant Ellen Destry, who is left to head up the area’s Crime Investigation Unit, must find a little girl who was abducted from the fairgrounds at the annual Waterloo Show before it is too late.

Praise For Chain of Evidence (A Hal Challis Investigation #4)…

Praise for Chain of Evidence

“Disher is definitely not to be missed.”
—Globe and Mail

“The character development suggests Peter Robinson, with enough darkness and ambiguity to suit fans of Rankin, and a kind of which-way-is-up sense of the police force that recalls early James Elroy. Moody, inventive, and extremely hard to put down.”
—Booklist, Starred Review

“Multilayered and multistranded, Chain of Evidence is written in vivid and uncompromising prose.”
—Sydney Morning Herald

“For lovers of police procedurals . . . you can’t do much better than Chain of Evidence.”
—Deadly Pleasures

“A compelling mix of procedural detail and action round out a fully credible plot and characters . . . A deeply satisfying read.”
—Publishers Weekly


Praise for the Hal Challis series

"This series boasts careful, realistic casework, but there’s enough darkness and ambiguity to suit John Harvey fans and a kind of which-way-is-up sense of the police force that recalls early James Ellroy. Moody, inventive, and extremely hard to put down."
—Booklist

“Garry Disher is an old favorite of mine, and it’s about time American readers got a shot at him.”
—Scott Phillips, author of Cottonwood and The Ice Harvest

Garry Disher is one of Australia's best-known novelists. He's published over forty books in a range of genres, including crime, children's books, and Australian history. Chain of Evidence, won the Ned Kelly Award for best Australian crime novel. His Wyatt crime series is also published in the US by Soho Crime. He lives on the Mornington Peninsula, southeast of Melbourne.