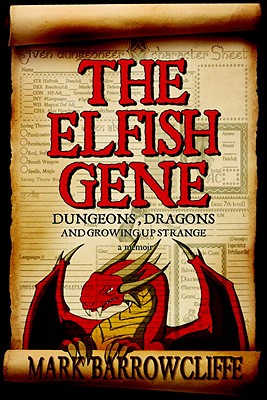 Dungeons, Dragons and Growing Up Strange

“Mark Barrowcliffe's memoir of his teenage years playing fantasy role-playing games champions the cause of a widely unacknowledged population of geeks, nerds, and dorks. The Elfish Gene is touching, hilarious, and far too familiar.”
— Bridget Allison, Phoenix Books, Essex, VT
View the List

"[Barrowcliffe] writes how D&D twisted his teenage development — and about how twisted teenage development is in general. It's easy to read in a weekend, and thanks to several hilarious, unbelievably well-remembered recountings of dialogue-heavy extreme nerdiness, begs a movie adaptation."—Seattle Times

“Barrowcliffe's retrospective self-awareness is by turns poignant and amusing ... as fantasy movies dominate the box office; the author offers a timely, appropriate memoir of addiction recovery ... worth a few hours holed up in the basement." -Kirkus Reviews

"I urge you to buy it yourself and make up your own mind. You'll love discussing it with your friends. There's not a whole lot written about gaming, especially from the inside, and The Elfish Gene belongs in every gamer's library." -Enter the Octopus Blog

"This is a good, funny book, and I am enjoying the heck out of it so far.  Barrowcliffe ... has an excellent writing style that is light and funny, and when he describes the game, you feel his excitement as he rolls the dice.... I hope [it] intrigues you as much as it intrigued me." -Geekscribe.com

Summer, 1976. Twelve-year-old Mark Barrowcliffe had a chance to be normal. He blew it. While other teenagers were being coolly rebellious, Mark—and twenty million other boys in the 1970s and ’80s—chose to spend his entire adolescence pretending to be a wizard, a warrior, or an evil priest. Armed only with pen, paper, and some funny-shaped dice, this lost generation gave themselves up to the craze of fantasy role-playing games. Spat at by bullies and laughed at by girls, they now rule the world. They were the geeks, the fantasy war gamers, and this is their story.

Mark Barrowcliffe grew up in Coventry, England. He worked as a stand-up comedian before writing his first hit novel, Girlfriend 44. He has written two other acclaimed comic novels, Lucky Dog and Infidelity for First-Time Fathers. He lives in Brighton, England.


Praise For Elfish Gene: Dungeons, Dragons and Growing Up Strange…

“Mark Barrowcliffe’s humorous, self-deprecating memoir of his misspent youth, ‘The Elfish Gene,’ is another welcome addition to the growing ‘nerdsploitation’ genre.”—Associated Press

Mark Barrowcliffe worked as a journalist and a stand-up comedian before writing his first hit novel, "Girlfriend 44." He has written two other acclaimed comic novels, "Lucky Dog" and "Infidelity for First-Time Fathers." He now lives in Brighton, England.
Loading...
or
Not Currently Available for Direct Purchase