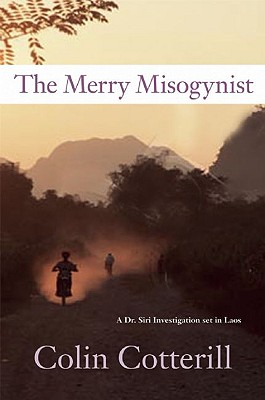 “There's no telling how long a serial killer can go without being caught, but in The Merry Misogynist Laotian coroner Dr. Siri goes all out to catch the killer of a beautiful young woman. Now if only the Communist bureaucrats will just let him do his job. A wonderful read!”
— Linda Dewberry, Whodunit? Books, Olympia, WA
View the List

In poverty-stricken 1978 Laos, a man with a truck from the city was “somebody,” a catch for even the prettiest village virgin. The corpse of one of these bucolic beauties turns up in Dr. Siri’s morgue and his curiosity is piqued. The victim was tied to a tree and strangled but she had not, as the doctor had expected, been raped, although her flesh had been torn. And though the victim had clear, pale skin over most of her body, her hands and feet were gnarled, callused, and blistered.

On a trip to the hinterlands, Siri discovers that the beautiful female corpse bound to a tree has already risen to the status of a rural myth. This has happened many times before. He sets out to investigate this unprecedented phenomenon—a serial killer in peaceful Buddhist Laos—only to discover when he has identified the murderer that not only pretty maidens are at risk. Seventy-three-year-old coroners can be victims, too.


Praise For The Merry Misogynist: A Dr. Siri Investigation Set in Laos…

Praise for the Dr. Siri series:

“Like Dr. Siri, Colin Cotterill has a touch of magic about him.”—The Boston Globe

“A crack storyteller and an impressive guide to a little-known culture.”—The Washington Post Book World

Colin Cotterill is the Dilys Award-winning author of nine books in the Dr. Siri Paiboun series: "The Coroner's Lunch," "Thirty-Three Teeth," "Disco for the Departed," "Anarchy and Old Dogs," "Curse of the Pogo Stick," "The Merry Misogynist," "Love Songs from a Shallow Grave," and "Slash & Burn," and" The Woman Who Wouldn't Die." He lives in Chumphon, Thailand, with his wife and six deranged dogs.
Loading...
or
Not Currently Available for Direct Purchase