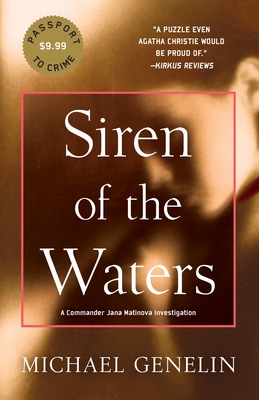 Siren of the Waters (A Jana Matinova Investigation #1)

Jana entered the Czechoslovak police force as young woman, married an actor, and became a mother. The Communist regime destroyed her husband, their love for one another, and her daughter’s respect for her. But she has never stopped being a seeker of justice.

Now, she has risen to the rank of commander in the Slovak police force and is based in the capital, Bratislava, a crossroads of central Europe. She liaises with colleagues across the continent to track a master criminal whose crimes include extortion, murder, kidnapping, and the operation of a vast human trafficking network.

This investigation takes her from Kiev in Ukraine to the headquarters of the European Community in Strasbourg, France; from Vienna to Nice during the Carnival, as she searches for a ruthless killer and the beautiful young Russian woman he is determined to either capture or destroy.

Praise For Siren of the Waters (A Jana Matinova Investigation #1)…

Praise for Siren of the Waters

“A truly fine novel. It’s filled with exactitude of place and people, taking us into a world that seethes with dangerous secrets. On that treacherous journey, Michael Genelin makes unfamiliar worlds seem knowable, and does so with great style.”
—Pete Hamill, author of North River

“A terrific novel by a man who knows crime, knows Europe, and knows how to write. Siren of the Waters is a genuine pleasure.”
—Thomas Perry, author of Silence

"In the end, we must acknowledge that we have been held spellbound by a master storyteller. Highly recommended.”
—Library Journal, Starred Review

“Solving the international murder-without-borders scheme becomes a puzzle even Agatha Christie would have been proud of . . . Grim but undeniably believable in its depiction of secret police sweeps, hounded political protesters and the compromises necessary to redeem a disgraced career. Not your usual wispy escapism, but well worthwhile for current-events junkies.”
—Kirkus Reviews

Michael Genelin is a graduate of UCLA and UCLA Law School. He has served as a consultant for the US State Department and USAID in Central Europe, Africa, Asia, and Haiti, and was a Deputy District Attorney in the LA District Attorney’s office. Michael has written for the stage, movies and television. He now focuses on writing novels, and is the author of the Commander Jana Matinova Investigations set in Bratislava, Slovakia. He lives with his wife in Paris.
Loading...
or
Not Currently Available for Direct Purchase