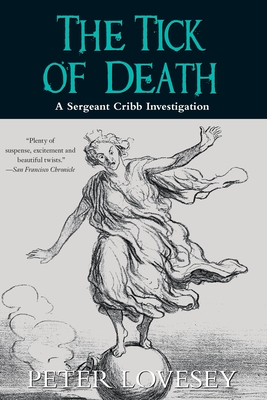 The Tick of Death (A Sergeant Cribb Investigation #5)

“Lovesey goes from strength to strength. A really entertaining extravaganza, judged to a nicety.” —The Times

London, 1884: A series of bomb blasts in public places is causing mayhem throughout the city. Even Scotland Yard’s CID office becomes a target, throwing suspicion on Constable Thackeray. The primary suspects are Irish terrorists seeking independence, but could the villain be someone else? A beautiful Irish woman? An American athlete? Sergeant Cribb reluctantly enrolls in a bomb-making course and infiltrates the Dynamite Party.

Based on the real events in London between 1884 - 1885, the story had its own resonance ninety years on.

Praise For The Tick of Death (A Sergeant Cribb Investigation #5)…

Praise for The Tick of Death

“Another of those wonderful Victorian background stories about Sgt. Cribb and Constable Thackeray . . . Plenty of suspense, excitement and beautiful twists.”
—San Francisco Chronicle

“Lovesey goes from strength to strength. A really entertaining extravaganza, judged to a nicety.”
—The Times

“The period detail is admirable: the narrative both witty and swift.”
—The Sunday Times

“Tense and dramatic. The best book I have read for a long time.”
—Birmingham Mail

“Lovesey is a master of the crime novel.”
—Sara Paretsky

“A treat . . . Lovesey’s restraint, wit, and charming cast ensure him a place in the winner’s circle.”
—Entertainment Weekly