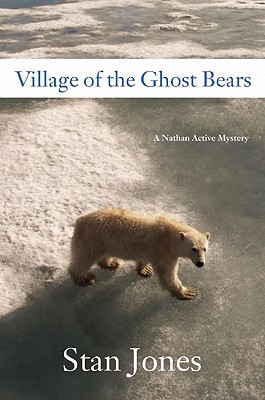 Village of the Ghost Bears

"You can't fake the stuff Stan Jones pulls off in "Village of the Ghost Bears" . . . A writer of muscular words and stark images, Jones sets up his scenes like film shots. . . . This kind of writing makes for strong reading, especially with a sturdy murder plot to give it structure."--"New York Times Book Review""Trooper Nathan Active's beat is a few outposts in a remote, frigid world. But wherever people live, they bring greed, madness, and death. Active's courageous and stubborn determination to gather the scattered bits of evidence make Stan Jones's Villageof the Ghost Bears a fascinating rendition of the human struggle for truth."--Thomas Perry, author of "Runner" and "Vanishing Act"

"His sympathetic portrayal of Alaska's mixed-ethnic traditions is a tribute to both the state and the states of mind it inspires."--"Publishers Weekly," starred review

Praise for the Nathan Active series:

"No one shows you the ugly side of Alaska the way Stan Jones does."--Marilyn Stasio, "The New York Times Book Review"

"Trooper Active proves such an interesting and likable guide that the selfish reader can't but hope Nathan won't get that Anchorage transfer for at least a few more books."--"The Wall Street Journal"

"I can't wait for Nathan Active's next adventure."--"Chicago Tribune"

"Jones captures in precise detail . . . the starkly individual spirit of this village's collection of characters. . . . His depiction of a freezing world of tarpaper houses and whaling camps is absolutely convincing."--"Houston Chronicle"

Alaska State Trooper Nathan Active must figure out what connects a dead hunter on a remote Arctic lake with a year-old fatal plane crash in the Brooks Range and a fire at the Chukchi Recreation Center that killed eight people, including the town's basketball star. The case turns out to involve a lucrative polar bear poaching operation and the intense bond between a brother and sister from the village of Cape Goodwin, famous in the Arctic for twins, polar bears, and schizophrenia. The heart of the matter, he discovers, is a dead woman whose killer remembers her as having a mouth so sweet "it was like kissing a Hershey bar."

Stan Jones is a native of Alaska. He has worked as an award-winning journalist and a bush pilot. He is the author of three previous mysteries in the acclaimed Nathan Active series.


Praise For Village of the Ghost Bears: A Nathan Active Mystery…

“In the fourth book of this enchanting series set in Alaska ... [Jones has] created a richly populated universe you’ll be sorry to leave.”—People

“Fans of Tony Hillerman’s Jim Chee novels will appreciate the direct, wistful storytelling style of Stan Jones. And if life in northwest Alaska seems bleak with its poverty and hard cold, the strong bonds connecting Nathan Active to the people he serves and lives with have their own appeal. Most of all, Village of the Ghost Bears is a solid crime story—one good for any armchair detective.”—Sacramento News and Review

Stan Jones is a native of Alaska, where he has worked as an award-winning journalist and bush pilot. He is the author of three previous mysteries in the acclaimed Nathan Active series.
Loading...
or
Not Currently Available for Direct Purchase