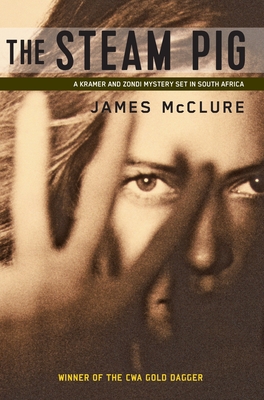 The Steam Pig (A Kramer and Zondi Mystery #1)

In the debut mystery featuring Lieutenant Kramer and Detective Sergeant Mickey Zondi set in South Africa, a beautiful blonde has been killed by a bicycle spoke to the heart, Bantu gangster style. Why?

Praise For The Steam Pig (A Kramer and Zondi Mystery #1)…

Praise for The Steam Pig

“James McClure's first novel arrives like a slam in the kidneys . . . a gripping style, real characters, and an exotic locale. . . . The Steam Pig will not only keep the reader's nose to the page, it will also make the reader think.”
—The New York Times Book Review

“More than a good mystery story, which it is, The Steam Pig is also a revealing picture of the hate and sickness of the apartheid society of South Africa.”
—The Washington Post

“That it takes place in the apartheid setting of South Africa, that it has a black and white police team so artfully conceived as to engender cheers, that it uses the power of subtlety over brash bias to make its points, sets it up as a memorable mystery.”
—Los Angeles Times

“From South Africa comes one of the best of the lot, The Steam Pig. It introduces as weird and sinister a group of malefactors as you will find anywhere, and maybe nowhere else.”
—St. Louis Post-Dispatch

"[McClure is] a distinguished crime novelist who has created in his Afrikaner Tromp Kramer and Bantu Sergeant Zondi two detectives who are as far from stereotypes as any in the genre."
—P. D. James

"McClure's stories ... have been noteworthy in equal measure for their poignant evocation of [South Africa], their perception of partnership, and their acute sense of sexual obsession."
—Time Magazine

"The pace is fast, the solution ingenious. Above all, however, is the author's extraordinary naturalistic style. He is that rarity—a sensitive writer who can carry his point without forcing."
—The New York Times Book Review

"Soho completes its reprinting of one of the finest police series to begin in the 1970s, James McClure's eight books about Tromp Kramer and Mickey Zondi, a South African biracial detective team in the days of Apartheid."
—Ellery Queen Mystery Magazine

James McClure was born in Johannesburg. Je published eight wildly successful books in the Kramer and Zondi series. He died on June 17, 2006.
Loading...
or
Not Currently Available for Direct Purchase