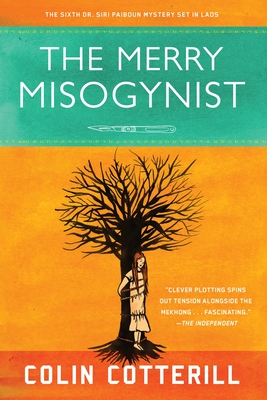 “There's no telling how long a serial killer can go without being caught, but in The Merry Misogynist Laotian coroner Dr. Siri goes all out to catch the killer of a beautiful young woman. Now if only the Communist bureaucrats will just let him do his job. A wonderful read!”
— Linda Dewberry, Whodunit? Books, Olympia, WA
View the List

When the corpse of a rural beauty turns up in Dr. Siri’s morgue, his curiosity is piqued. The victim was tied to a tree and strangled, but she had not, as the doctor had expected, been raped. On a trip to the hinterlands, Siri learns that many women have been killed this way, and he soon discovers that not only pretty maidens are at risk. Seventy-three-year-old coroners can be victims, too.

Praise For The Merry Misogynist (A Dr. Siri Paiboun Mystery #6)…

Praise for The Merry Misogynist

"This wonderful series has consistently managed to convey the beauty and sadness of this damaged country through the wisdom and humor of its protagonist."
—The Boston Globe

"With the help of a macabre sense of humor, and a jolly coroner, Colin Cotterill has concocted a wryly entertaining mystery that makes tracking a psychopathic killer more enjoyable than you would expect . . . [The Merry Misogynist] reads like series of sardonic vignettes, stylishly written in a way that indicates that the author has a merry take on the vicissitudes of life, and wants the reader to enjoy it with him. Long live Dr. Siri."
—The Washington Times

"It is part of Colin Cotterill's skill that he grips the reader by intercutting between the cerebral deductions of Siri and the determined planning of the killer. Clever plotting spins out tension alongside the Mekhong . . . Tight plotting and a background full of the sounds and colour of the Orient make this a fascinating read."
—The Independent, UK

"The consistently fine characterizations of the entire cast are matched by a tightly constructed plot in which the tension is heightened with excerpts from the killer's point of view."
—Booklist

"Siri's morgue is as entertaining as a comedy club."
—Kirkus Reviews

"[Dr. Siri] is as delightfully eccentric and unpredictably clever as ever . . . Cotterill provides a detailed look at the life, customs, and political realities of a place and time unfamiliar to most Americans: Laos in the 1970s. And again he does this with his trademark combination of crisp plotting, witty dialogue, political satire, and otherworldly phenomena."
—School Library Journal

"The glimpses of everyday life in Laos will appeal to those readers curious about a culture unfamiliar to most Americans."
—Publishers Weekly

"[Dr. Siri is] a wonderful character, and a rather unique one in detective fiction . . . Highly and most enthusiastically recommended."
—Mysterious Reviews

"A very enjoyable read . . . Siri is a character worth pursuing."
—Reviewing the Evidence

"A funny, sweet and devilishly complex mystery . . . Colin Cotterill is a master of sleight of hand."
—Curled Up with a Good Book

"The Merry Misogynist (and all the other Dr Siri books) are carefully crafted police procedurals and each book has a decided twist in the tail—none of which I've yet managed to anticipate . . . Dr Siri can be decidedly unsettling."
—The Bookbag, UK

“Like Dr. Siri, Colin Cotterill has a touch of magic about him.”
—The Boston Globe

“A crack storyteller and an impressive guide to a little-known culture.”
—The Washington Post Book World

Colin Cotterill is the Dilys Award–winning author of nine other books in the Dr. Siri Paiboun series: The Coroner’s Lunch, Thirty-Three Teeth, Disco for the Departed, Anarchy and Old Dogs, Curse of the Pogo Stick, Love Songs from a Shallow Grave, Slash and Burn, The Woman Who Wouldn’t Die, and Six and a Half Deadly Sins. He lives in Chumphon, Thailand, with his wife and five deranged dogs.
Loading...
or support indie stores by buying on