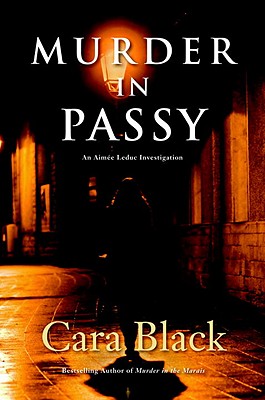 The village-like neighborhood of Passy, home to many of Paris's wealthiest residents, is the last place one would expect a murder. But when AimEe Leduc's godfather, Morbier, a police" commissaire," asks her to check on his girlfriend at her home there, that's exactly what AimEe finds. Xavierre, a "haut bourgeois "matron of Basque origin, is strangled in her garden while AimEe waits inside. Circumstantial evidence makes Morbier the prime suspect, and to vindicate him, AimEe must identify the real killer. Her investigation leads her to police corruption; the radical Basque terrorist group, ETA; and a kidnapped Spanish princess.
You're invited to experience even more of AimEe Leduc's Paris with an exclusive companion by Cara Black. Download the AimEe Leduc Companion for free at www.sohopress.com/companion.pdf.

Praise For Murder in Passy…

“Addictive ... Leduc is always a reliable and charming guide to the city's lesser-known corners.”
—Seattle Times

“A staccato tour de force, it’s as action- and intrigue packed as others in the series.... Also typically, while chasing the bad guys Aimée not only pounds the Parisian pavement, but also boldly scales rooftops and climbs in sewers. All this, while wearing heals and vintage clothing; Aimée is as bold and classy as ever.”
—Sacramento News and Review

“The ideal mix of the personal, the political, the puzzling and the Parisian make Aimée’s latest a perfect pleasure.”
—Kirkus Reviews, Starred Review

“Aimée is a fantastic guide as she invites the reader along on an excursion of Paris on the back of her scooter, which most tourists traveling to the City of Light never see. Back streets and alleys, smoky bistros and Paris mansions set the backdrop for this mystery.”
—New York Journal of Books

“Cara Black of San Francisco is one of our favorite mystery authors.”
—Sacramento Bee

“The rest of us will follow Aimee anywhere, the blinder the alley the better, thrilled to hitch a ride on the back of her scooter.”
—Booklist

“By blending a murder investigation with a tale of political intrigue, Cara Black’s newest book effectively combines elements of both mystery and thriller. Murder in Passy retains all the emotional excitement of a thriller, but it also manages to provide a logically satisfying, yet still surprising, solution to Xavierre’s murder.”
—Mystery Series Examiner


Praise for the Aimée Leduc series

“Black does for Paris what Dashiell Hammett did for San Francisco. She makes the city shimmer.”
—Plain Dealer (Cleveland)

“Charming.... Aimée is one of those blithe spirits who can walk you through the city’s historical streets and byways with their eyes closed.”
—The New York Times Book Review

“Leduc has such a thorough grasp of the practicalities of investigation, plus a penchant for undercover work that will have readers on pins and needles.”
—San Francisco Chronicle

Cara Black is the author of ten previous books in the "New York Times "bestselling AimEe Leduc series, all of which are available from the Soho Crime imprint. She lives in San Francisco with her husband and son and visits Paris frequently.
Loading...
or support indie stores by buying on
(This book is on backorder)