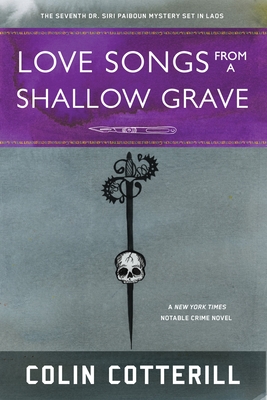 When a Lao female security officer is discovered stabbed through the heart with a fencing sword, Dr. Siri, the reluctant national coroner for the People’s Democratic Republic of Laos, is brought in to examine the body. Soon two other young women are found killed in the same unusual way. Siri learns that all three victims studied in Europe and that one of them was being pursued by a mysterious stalker. But before he can solve the case, he is whisked away to Cambodia on a diplomatic mission. Though on the surface the Khmer Rouge seem to be committed to the socialist cause, Siri soon learns the horrifying truth of the killing fields and finds himself thrown into prison. Can the seventy-four-year-old doctor escape with his life?

Praise For Love Songs from a Shallow Grave (A Dr. Siri Paiboun Mystery #7)…

Praise for Love Songs from a Shallow Grave

“You get a real feeling for what Laos was like in the ’70s. The humor is wonderful, too—very subtle, very British.”
—New York Post

“This is the seventh and most sardonic of Mr. Cotterill's Dr. Siri series, and it is not easy to cope with the combination of misery and merry melancholy that he employs. His writing, as always, is skillful and smooth and his plot is artfully strung together. The book fascinates as it chills."
—The Washington Times

“I love this elegantly written series, set in Laos with clever, septuagenarian coroner Dr. Siri. This one, the seventh, is the best, but all of them are terrific . . . A delightful mix of history and politics, and an excellent mystery.”
—The Globe and Mail

“Shallow Grave carries on in the wry, unpredictable manner of previous Cotterill books. Unlike the earlier novels, this one contains sections of first-person narrative by Siri. His voice is as marvelous as everything else about him.”
—Sacramento News and Review

“It's a rare treat to say that a book placed so far into a series is the best one. Authors more often than not run out of steam by the seventh book. Not Colin Cotterill.”
—Oregon Live (The Oregonian)

“Cotterill, a resident of Thailand, has a gift for creating memorably eccentric characters, while spinning a fascinating array of Southeast Asian history and folklore into his narratives.”
—Japan Times

“In his seventh installment (after The Merry Misogynist) Cotterill vividly depicts a Southeast Asia still traumatized by the Vietnam War—the horrors perpetrated by the Khmer Rouge, the shocking poverty, the rampant corruption, and the steadfast spirit of the people, And Dr. Siri is a one-of-a-kind protagonist rivaled only by Eliot Pattison’s Shan Tao Yung. Highly recommended for series fans and readers who enjoy international mysteries.”
—Library Journal, Starred Review

“Dr. Siri, his friends and colleagues are charming, and the puzzle is intriguing.”
—The Free Lance-Star

Colin Cotterill is the author of ten other books in the Dr. Siri Paiboun series, including The Coroner’s Lunch, Thirty-Three Teeth, Disco for the Departed, and Six and a Half Deadly Sins. His fiction has won a Dilys Award and a CWA Dagger in the Library. He lives in Chumphon, Thailand, with his wife and five deranged dogs.
Loading...
or
Not Currently Available for Direct Purchase