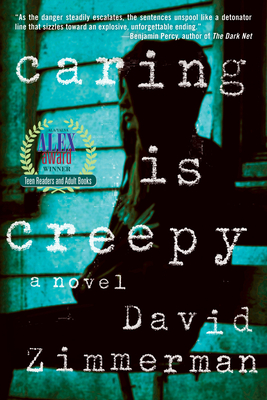 Fifteen-year-old Lynn Marie Sugrue is doing her best to make it through a difficult summer. Her mother works long hours as a nurse, and Lynn suspects that her mother’s pill-popping boyfriend has enlisted her in his petty criminal enterprises. Lynn finds refuge in online flirtations, eventually meeting up with a troubled young soldier, Logan Loy, and inviting him home. When he’s forced to stay over in a storage space accessible through her closet, and the Army subsequently lists him as AWOL, she realizes that he’s the one thing in her life that she can control. Meanwhile, her mother’s boyfriend is on the receiving end of a series of increasingly violent threats, which places Lynn squarely in the cross-hairs.

Praise For Caring Is Creepy…

Praise for Caring is Creepy

"Lynn’s voice is authentically sardonic and compelling.... The intersections of Lynn’s and Logan’s story line with the consequences of Hayes’s shady dealings are consistently exciting."
—Publishers Weekly

"David Zimmerman has written a beautifully menacing novel. I found it impossible to stop reading—as teenage girls flirt with danger online, an AWOL soldier hides out in a closet, and drug deals go dead wrong—and you will too, as the danger steadily escalates, the sentences unspooling like a detonator line that sizzles toward an explosive, unforgettable ending."
—Benjamin Percy, author of The Wilding and Refresh, Refresh

"This story is sweet, funny, sad, infuriating, and all too real."
—Tulsa Books Examiner

"An engrossing and unforgettable tale based on actual events.... Those who can empathize with flawed characters in dire situations will not be able to put this book down.”
—Library Journal

“[A]n insidious and deceiving but often sweet summertime ensnarement that is alternatively a tangled web and tender trap.” —Blogcritics.org

“[A] remarkable debut.... Zimmerman is a talent to watch.”
—Publishers Weekly, STARRED REVIEW

“Zimmerman adroitly depicts [Iraq’s] isolated moonscape—a place as liable to produce hallucinations and heat exhaustion as it is to churn up sandstorms that last for days.”
—Los Angeles Times

David Zimmerman was raised in Atlanta, Georgia. After receiving his MFA in creative writing from the University of Alabama, he spent several years living and working in Brazil and Ethiopia. He now teaches at Iowa State University. His debut novel, The Sandbox, was released by Soho in 2010.
Loading...
or
Not Currently Available for Direct Purchase