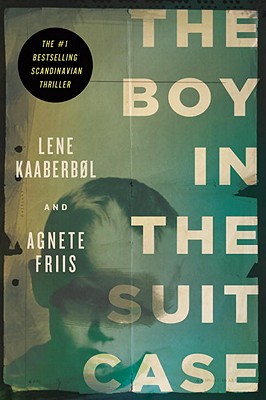 The Boy in the Suitcase (A Nina Borg Novel #1) (Hardcover)

“Not just another Scandinavian thriller, this book catches your attention from page one! Red Cross nurse Nina Borg gets caught up in a terrible series of events, when her erstwhile friend asks for help and leaves her a key to a public locker. The locker contains a suitcase that is unbearably awkward to carry, and when Nina opens it, she finds a naked, unconscious little boy. Who is this boy, and what does he have to be saved from? A great introduction to an award-winning team of Danish authors.”
— Margaret Brennan Neville, The King's English, Salt Lake City, UT
View the List

Nina Borg, a Red Cross nurse, wife, and mother of two, is a compulsive do-gooder who can’t say no when someone asks for help—even when she knows better. When her estranged friend Karin leaves her a key to a public locker in the Copenhagen train station, Nina gets suckered into her most dangerous project yet. Inside the locker is a suitcase, and inside the suitcase is a three-year-old boy: naked and drugged, but alive.

Is the boy a victim of child trafficking? Can he be turned over to authorities, or will they only return him to whoever sold him? When Karin is discovered brutally murdered, Nina realizes that her life and the boy’s are in jeopardy, too. In an increasingly desperate trek across Denmark, Nina tries to figure out who the boy is, where he belongs, and who exactly is trying to hunt him down.

Lene Kaaberbøl and Agnete Friis are the Danish duo behind the Nina Borg series, which also includes Invisible Murder, Death of a Nightingale, and The Considerate Killer. Friis is a journalist by training, while Kaaberbøl has been a professional writer since the age of fifteen, with more than two million books sold worldwide.

“Here’s something you don’t often see in Nordic noir fiction—a novel written by two women about the criminal mistreatment of women and children, compassionately told from a feminine perspective and featuring female characters you can believe in . . . the first collaborative effort of Lene Kaaberbøl and Agnete Friis, and it packs an almighty punch.”
—The New York Times Book Review, Notable Crime Book of 2011

“Fans of Nordic crime fiction, rejoice: Something is rotten in Denmark. But never fear, Red Cross nurse Nina Borg is on the case . . . A wild ride.”
—New York Post

“Terrific . . . What’s for sure is that, once you start reading, you can’t stop—it’s as if the poor kid’s life depends on your getting to the end as fast as possible . . . looks like another winning entry in the emotionally lacerating Scandinavian mystery sweepstakes.”
—The Washington Post

“Written in that sparse, uniquely Scandinavian style sure to draw comparisons with a certain blockbuster trilogy (this is better), this story packs plenty of emotional suspense and interpersonal friction without veering into melodrama. Kaaberbøl and Friis know when to reveal and when to pull back, presenting just enough back story about Sigita's upbringing and marriage, just enough about Nina's relationship with her family and friends, without ever interrupting the action. The disparate perspectives do as much to humanize all the action as they do to disorient—and I mean that in the best possible sense.”
—Associated Press

“A frightening and tautly told story of the lengths to which people will go for family and money.”
—USA Today

“A terrific central character and a great plot . . . As the story builds, each storyline is woven in, and no character, including Nina Borg, is what we think . . . A series to watch.”—Toronto Globe and Mail

"Soho is known for high-quality crime fiction set around the globe, so it's no surprise that this gripping Danish thriller kept me turning pages while its poignant characters lodged in my heart. Denmark has never looked so sinister!"
—Denise Hamilton, Edgar-winning author of the Eve Diamond series, The Last Embrace and Damage Control

"Stunning. Hooked me from the beginning. The Danish bourgeoisie and the criminal underworld collide in a moving, fast-paced thriller with psychological depth."
—Cara Black, bestselling author of Murder in the Marais

"Lene Kaaberbøl and Agnette Friis have created a dark shimmering gem of a crime thriller in The Boy in the Suitcase. Using the reliable skills we’ve come to expect from their Nordic brethren—clean tight prose, recognizably human characters, a fierce social conscience and airtight plotting—they’ve fashioned as engaging a story as you’re going to read anytime soon. The pages blur you read them so quickly, and yet the wallop to your mind and heart is real and deep. There must be something in the water up there—for which we should all be profoundly grateful."
—David Corbett, Edgar-nominated author of Do They Know I’m Running?

“A great introduction to an award-winning team of Danish authors.”
—November 2011 Indie Next List

“Women characters get star turns in this book, with the most poignant being Sigita, the young single mother desperate to find her missing son. Realizing how acutely alone she is in this pursuit, Sigita summons a pugilistic tenacity in the face of the indifference of family and police to her son’s plight as well as her own.”
—Boston Globe

“Among the best crime novels of the year . . . marks Kaaberbøl and Friis as serious talents to be reckoned with, ready to be discovered by an American audience.”—Publishers Marketplace

“Stieg Larsson fans will find a lot to like in The Boy in the Suitcase . . . [Nina Borg] will strike many, particularly female readers, as a more appealing version of Lisbeth Salander.”
—Publishers Weekly

“Of all the recent Scandinavian thrillers that have been rushed into translation for fans of Stieg Larsson, here’s one whose pair of strong heroines taking on a monstrous conspiracy of men behaving badly is actually reminiscent of the Millennium Trilogy . . . A debut that’s a model of finely tuned suspense.”
—Kirkus Reviews

“This past-paced, suspenseful thriller intertwines several stories, gradually revealing the motivations of multiple characters and building tremendous suspense. The novel should be recommended to anyone who enjoys Asa Larsson’s Rebecka Martinsson series and, especially, Christian Jungersen’s The Exception (2007), another Danish thriller focused on a group of female characters.”
—Booklist

“The Boy in the Suitcase ratchets along at a breathless pace, skillfully switching points of view in a tightly choreographed arrangement.”
—Daily Beast

"This is a thrilling and most urgent novel reflecting a terrifying reality."
—Maj Sjowall, bestselling co-author of the Martin Beck series

"Warning! If you open this book, your life will be on stand-by."
—Elle (Denmark)

"Extraordinary . . . A crime novel where everything is perfectly done."
—The Weekend Newspaper (Denmark)

“The Boy in the Suitcase, cements Scandinavia’s reputation as a new hunting ground for tautly-plotted, well-written mysteries . . . a fast-paced thriller written in tight and sparse prose that seems to be the hallmark of Scandinavian mystery authors. A compelling read that you’ll find hard to put down.”
—Mystery Cime Librarian

"The first in a series of mysteries from Denmark is a highly emotional story of secrets and bad decisions. It is also about women: desperate, scared women; women who refuse to look at choices they’ve made; and most of all, a very determined, brave woman who has to get involved in the lives of others. It starts with a series of short chapters from the viewpoints of seemingly unconnected characters. The writing is sparse, never telling the readers more than they must know at the moment and the action and emotion are continuous. The surprise ending is perfect. You won’t be able to put this down."
—Romantic Times

“The Boy in the Suitcase is an exceptional crime fiction debut that shines a light on a tragic and real social issue. It manages to address this problem with a seriousness and social conscience that add significant weight to the story. It is an engaging, suspenseful, and excellently written crime fiction novel with complex and well-drawn characters which has been a bestseller throughout Scandinavia. The Boy in the Suitcase is definitely worth a read!”
—Scandinavian Books' Nordic Book Blog

“The Boy in the Suitcase by Lene Kaaberbøl and Agnete Friis is another exemplary Scandinavian mystery with a seriously driven heroine, and a most unusual plot and premise, that will keep you guessing until the very end.”
—BookLoons, Recommended Read

“A fast paced thriller that keeps the reader interested and invested from the moment Nina discovers the life stolen away inside that suitcase . . . Lene Kaaberbøl and Agnete Friis have written a story about motherhood, immigration, crime and punishment and redemption that needs no comparison.”
—Literate Housewife
or
Not Currently Available for Direct Purchase
Copyright © 2020 American Booksellers Association